HomeEventsRegattaHerrmann up to third and growing threat to leader Dalin
Regatta 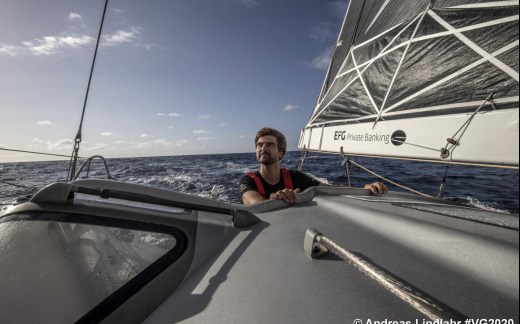 Racing now with less than 160 miles to go to pass Recife on the north easterly corner of Brasil, leading duo Charlie Dalin and Louis Burton will be starting to recognise a threat from German skipper Boris Herrmann as he moved into third place overnight Thursday and is now just 39 miles behind Dalin and 17 behind Burton

The 37 year old from Hamburg has been quickest of the top group overnight, profiting especially from his position with Seaexplorer Yacht Club de Monaco slightly further offshore than Dalin and Burton – about 30 miles – but more particularly because he has a pair of larger, new generation, working foil on his IMOCA 60, which were upgraded last March, and he has consistently reported that he has a full armoury of largely undamaged sails. Herrmann was quicker than leader Dalin this morning by two knots and in theory his gains should continue at least until the transition zone off Recife where the wind could be lighter depending on the time of day the leaders pass.

Herrmann has played to a patient, careful strategy in the Southern Oceans looking to preserve his material as best as possible, staying out of the worst of the winds in the extreme south but pressing for high average speeds from his VPLP-Verdier IMOCA which was built as Edmond de Rothschild and skippered by Sébastien Josse in the last race. In 2016 the French skipper retired in the south with multiple problems. With two racing circumnavigations under his belt already Herrmann was 12th in the Transat Jacques Vabre in 2019 and seventh in last year’s solo Vendée Arctic Les Sables d’Olonne warm up race. It would not be a surprise to see the German skipper leading the fleet after leaving the Brasilian coast. But the route north is not as simple as it maybe seemed.

The Doldrums extend from about 0 ° 30 South to 3 ° 30 North), that is to say about 200 to 250 miles wide at 33 ° West but it is maybe not as narrow and easy as some have been suggesting. There are a few storm cells forming and the cloud mass appears very dark. The trade winds in the Northern hemisphere seem to converge with those of the Southern hemisphere to generate an approximately easterly flow for the weekend.

But the after the hard, bouncy slamming climb up the NE’ly trades to the Cape Verde archipelago the big question arises about crossing a transition zone, a wide anticyclonic ridge of light winds which will stretch from the Canaries all the way across the Atlantic which must be crossed. And so while there has perhaps been a supposition that the Vendée Globe podium might be decided among the top six just now within 85 miles of each other this morning there are three more behind between 150 and 225 miles behind, including Jean Le Cam in ninth. And the time compensations for the search and rescue of Kevin Escoffier, 6 hours to Herrmann, 10hrs 15 to Yannick Bestaven and 16hrs 15mins to Le Cam may yet prove crucial.