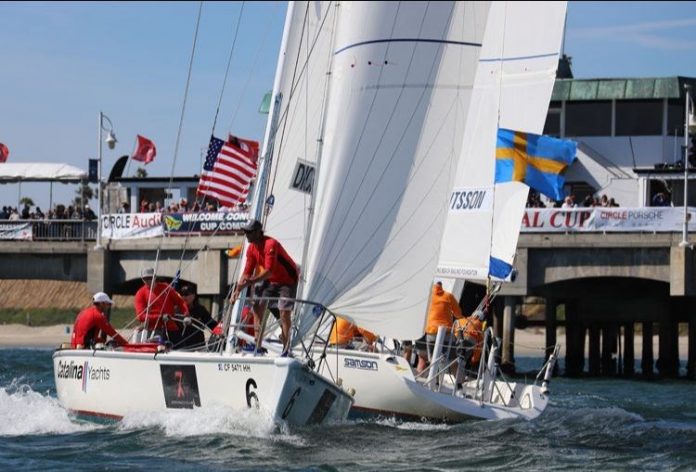 Congressional Cup Chairman Chris Macy has announced the 2021 event will be postponed to mid-September in light of the status of the COVID-19 pandemic and recovery. “We look forward to celebrating a return to the glory of Congressional Cup racing,” Macy said, when this legendary match race regatta returns.
An official World Championship event of the World Match Racing Tour and a Grade One competition, the Congressional Cup has been hosted by Long Beach Yacht Club since 1965 and is known as the ‘grandfather of match racing’ and pioneer of on-the-water umpiring that is the standard in yacht racing today.

Organizers plan to follow the traditional program with the world’s top-ranked skippers from around the globe competing for the esteemed Congressional Cup trophy.

The revised schedule will commence with the Ficker Cup qualifier Sept. 10 to 12, to determine the final two entries to Congressional Cup. Then, on Wednesday Sept. 15, the thrill of premier-level match racing returns to the waters off Belmont Veterans Memorial Pier for five exciting days, culminating with finals Sunday Sept. 19. Racing commences at roughly noon each day and is held in a fleet of identical 37-foot Catalina keelboats, which guarantee a focus on skill and tactics.

The last Congressional Cup was held in April of 2019 – leaving world-class skippers long in suspense to see who will next wear the Crimson Blazer. In that contest Ian Williams (GBR) scrambled up the leaderboard through an international field of top-ranked skippers after a slow start. Warming up in the California sunshine, six-time match racing world champion Williams and his Team GAC Pindar subsequently enjoyed an 11-match winning streak, eliminating foe Taylor Canfield (USA) in the semis and striking out Scott Dickson (USA) in the finals, to win the iconic Crimson Blazer. Doing so, Williams secured his fourth Congressional Cup title: a feat matched by an elite few, including Canfield, Gavin Brady, Rod Davis and Peter Holmberg.

Established in 1929, Long Beach Yacht Club is recognized as a leader in the international yachting community for its commitment to excellence in yacht racing and innovation in race management. In addition to hosting the Congressional Cup and numerous other local, national and international yachting events, the Club’s member families enjoy a year-round calendar of social, yachting and junior activities at its beautiful clubhouse on the shore of Alamitos Bay.

Since 2000, the World Match Racing Tour and its events have awarded over USD23million in prize money to sailors which has helped to contribute to the career pathway of many of today’s professional sailors.