HomeEventsRegattaVendée Globe updates: First Among Equals At The Equator
Regatta 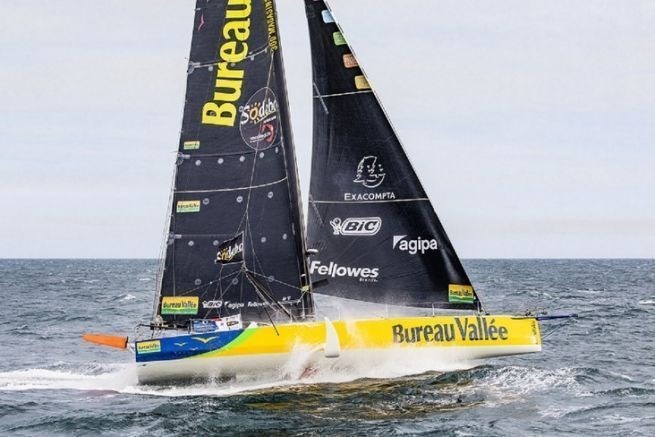 Louis Burton, the 35 year old Saint Malo skipper of Bureau Vallée 2 was the first Vendée Globe skipper to break back into the northern hemisphere last night, crossing the Equator at 1911hrs UTC last night. Just less than one hour later and some 50 miles to the east of him Charlie Dalin crossed second and 37 minutes later, close to the wake of Burton, Germany’s Boris Herrmann also returned to the ‘home’ hemisphere. So just one hour and 37 minutes separated the top three boats and on the early morning rankings that equates to just 22 miles between first and third in terms of distance to finish. When Yannick Bestaven brought Maître Coq IV across at 0236hrs, 3hrs 30mins after fourth placed LinkedOut the top five had crossed within seven hours.
And so increasingly it is looking like this Vendée Globe will be decided after the Canary Islands and who best negotiates a high pressure ridge from there and hooks into the low pressure system which accelerates the leaders towards Les Sables d’Olonne and the finish line.

Speeds have remained high among the leading pack, Damien Seguin (Groupe APICIL) seemed slowed – under a cloud perhaps – while Burton, Herrmann and Ruyant have all been over 20kts consistently and the German skipper is just 22 miles off the lead. And it does seem like the option to the west has been profitable, faster and so we may see a new leader soon.

And behind too it is quick as the breeze has built Giancarlo Pedote (Prysmian Group), Benjamin Dutreux (OMIA-Water Family) and Jean Le Cam (Yes We Cam!) Have are in overdrive  heading north at 16kts or more towards a passage at 33 ° West and all the time they have markers ahead in the form of the leading pack showing the fast lane or the potholes by their speeds and routes.

Behind Armel Tripon (L’Occitane en Provence) has built a gap to Clarisse Crémer (Banque Populaire X) of about 200 miles in SE’ly trade winds of around 15 knots. Romain Attanasio (Pure-Best Western) seems to be extricating himself from a high pressure zone that is holding on to Isabelle Joschke (MACSF) a few tens of miles further south-east as she heads to a Brasilian haven.

The trade winds beckon in the South Atlantic for Jérémie Beyou (Charal) who has made the break from Arnaud Boissières (La Mie Câline-Artisans Artipôle) and Alan Roura (La Fabrique) who are upwind in northerly winds. On the Argentinian coastStéphane Le Diraison (Time for Oceans) and Didac Costa (One planet One ocean) are downwind in SW’lies  with the Japanese skipper Kojiro Shiraishi (DMG MORI Global One). And so this trio might still come back to Pip Hare who in the heart of a depression that will move away from her to the south.

Meantime it will be a day of celebration for Briton Miranda Merron (Campagne de France) and Clément Giraud (Compagnie du Lit-Jiliti) who should escape the Pacific this Sunday afternoon or late morning in good sailing conditions, passing Cape Horn in around twenty knots of breeze from the West.