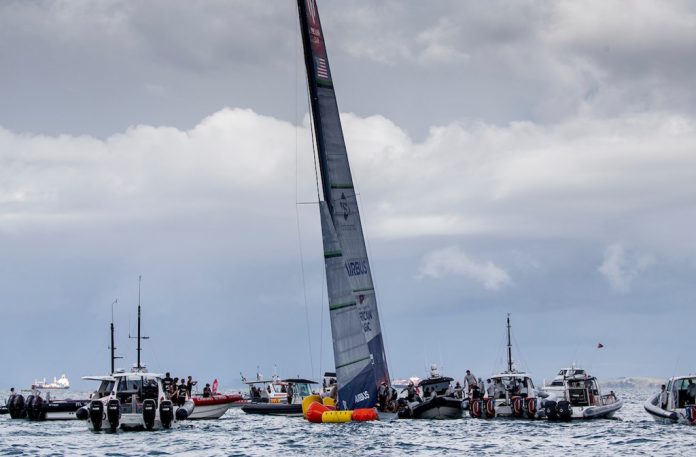 After racing into a squall, crashing, capsizing, incurring significant damage and coming close to sinking, American Magic’s AC75 racing yacht, Patriot, made it back to shore at 10:45 PM NZDT after a herculean effort to save the boat.

“First and foremost, we are incredibly grateful and thankful that everybody is safe,” said Terry Hutchinson, Skipper and Executive Director of American Magic, the U.S. Challenger for the America’s Cup. “The team did an incredible job getting Patriot back to the dock.”

The arrival of the American AC75 back to the team base in Wynyard Quarter was due not only to the perseverance of the team, which never gave up the fight over many hours, but that of the greater Auckland and America’s Cup communities. The three other Cup teams, the AC36 event management team,  and multiple branches of Auckland’s rescue services came to the aid of American Magic in a moment of urgent need.

“The response from the local community here was incredible, and you can’t give enough thanks to the police, fire and local authorities for their quick response,” said Hutchinson shortly after stepping ashore, in darkness, alongside his exhausted but relieved teammates.

“The response from the other teams was amazing, too. It was certainly heartwarming to see all the support, and obviously we needed it because this was a crisis situation. Huge thanks to Emirates Team New Zealand, to INEOS Team UK, and to Luna Rossa Prada Pirelli for coming out and helping us.”

On the final leg of a race she was leading, a significant puff of wind sent the American AC75 hurtling into the air, followed by a hard re-entry into the water. The shock of the landing tore a hole into the port side of the yacht, which was not immediately apparent to the sailors onboard. Patriot capsized sideways into the water, port side down, which temporarily hid the extent of the damage.

After following well-practiced capsize procedures, and determining that all were safe, American Magic righted the yacht to discover that she was sitting low in the water. It was apparent that this was a much different scenario than the team’s previous AC75 capsize, which occurred with the team’s now-retired first AC75, Defiant.

“We knew something was wrong straight away,” said Hutchinson. “When we tipped DEFIANT over, the boat was pretty buoyant and sat pretty high on her side. When we righted Defiant, and as we saw with Team New Zealand a few days ago when they righted their boat, the recovery was instantaneous. As soon as you get the breeze underneath the boat, underneath the mainsail, the boat pops back up.”

“Today on Patriot, when I was getting out of my cockpit, we were lower in the water. The ‘pop-up’ wasn’t happening. So that was kind of the first indication. [Boat Captain] Tyson [Lamond] came through the comms saying ‘I think there’s a hole in the boat.’ We spent the next couple of hours securing the platform.”

In terms of how the team will move forward, Hutchinson said the process of damage analysis, repair planning and repair execution would begin tonight and continue nonstop in an effort to get Patriot back in action.

“We have to see what the damage is on the inside of the boat, apart from the hole. Fortunately we’re here at our base now, they’re getting the rig out, and we’ll assess the damage and go forward.”

Hutchinson said that this type of incident would certainly be a major challenge to overcome, especially with only 12 days remaining until the Prada Cup semifinals. He also said that the resilience of his team is never in doubt.

“Time and time again, American Magic has always responded to the adverse situations that we’ve been faced with, be it COVID-19 or other things we’ve come across in the last three years,” said Hutchinson. “This one is probably a bit of a larger challenge, but as always, how you get up is more important than how you get knocked down. I’m confident in us. I’m confident in our people.”

A race that will be long-remembered for the dramatic events that followed it got off to a challenging start for American Magic. The team was caught out of position in the pre-start and entered the starting box both late and in a vulnerable position. Luna Rossa Prada Pirelli tried to take advantage of the mistake and force a foul, but the umpires waved it off. After this close call, the remainder of the pre-start was an even affair. Both boats charged across the line in sync, with American Magic in the windward position.

Luna Rossa earned the first cross, but the race soon turned in favor of American Magic. Both boats sailed the first beat in 15 to 20 knots of breeze, and the day was a showcase of the immense upwind performance of the AC75 class. The two Challengers charged up the course at nearly 40 knots of boatspeed. Helmsman Dean Barker and Skipper/Tactician Terry Hutchinson took advantage of a favorable lefthand shift in the breeze, and what appeared to be a slight speed advantage, to put American Magic in position to lead Luna Rossa into the top mark. After another unsuccessful penalty request from Luna Rossa, Dean Barker steered PATRIOT through the windward gate 6 seconds ahead of the Italians.

A solid run saw the lead double to 13 seconds. Both boats rounded the lefthand gate in a very fresh breeze. Halfway up the second beat, Luna Rossa incurred a penalty for a boundary violation and dropped a little further behind. The lead doubled to nearly 30 seconds at the top mark and with a big shift to the left, American Magic was able to lay the leeward gate on starboard jibe after just a short stretch on port jibe around the top mark.

“That squall was moving down the left side of the racetrack, and so we came in around the bottom mark, we trimmed up and sailed 20 seconds to the boundary and tacked,” said Hutchinson. “We tacked in like nine knots of breeze, after having much more than that for most of the race. The breeze was just evaporating all over the place. And so, you know, as we’ve learned over the last couple of days, you have to be in the pressure or the breeze can evaporate on you.”

The final upwind leg was similarly one-sided and American Magic took advantage of the bias to increase its advantage heading into the final mark. This is when disaster struck for the Americans in the form of another left shift and a significant increase in the windspeed due to an oncoming squall. Patriot went for the left gate mark, rounded, and then reared up, crashed down and capsized to port.

As the AC75’s are not self-righting, the race against Luna Rossa was over. A second race began almost immediately to save a damaged Patriot from sinking. The unfortunate series of events ripped away a much-needed first Prada Cup victory from the U.S. team. Luna Rossa was awarded their second point of the regatta.

“Obviously it’s not exactly the day that we wanted,” said Hutchinson. “We had a good race going and the boat was going really well.”

The first race of the day was without any doubt the tightest match raced so far, with Emirates Team New Zealand and...
Read more
- Advertisment -