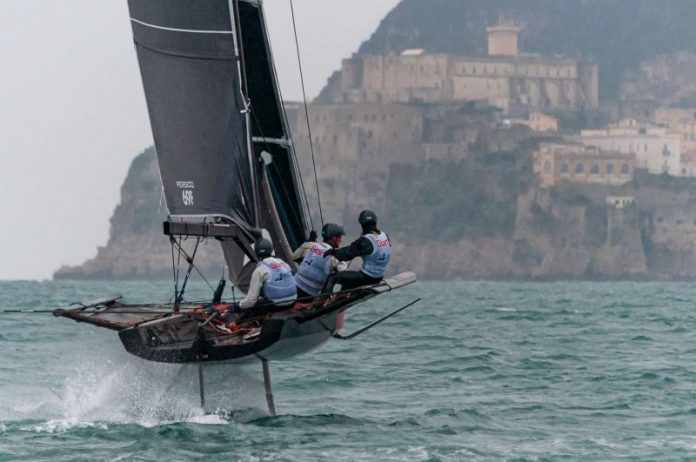 Young Azzurra, the sports project launched in 2020 by the Yacht Club Costa Smeralda dedicated to talented young Italian sailors, is set to take part in international regattas in 2021 including the Youth Foiling World Cup and several legs of the Persico 69F Cup circuit.
﻿
The team, composed of skipper Ettore Botticini, Federico Colaninno (flight controller), Francesca Bergamo and Erica Ratti – the two mainsail trimmers who alternate on board, along with coach Enrico Zennaro, has recently resumed training aboard the Persico 69F in the waters of Gaeta.

The town in southern Lazio will also be the location for the first event of the year for the team: the opening leg of the Youth Foiling World Cup, which will take place from 24 February to 12 March. Created to replace the Youth America’s Cup, which had been scheduled for February-March 2021 in Auckland and was later cancelled due to the global pandemic, the schedule for the event includes the opening ceremony on 26 February, followed by a warm-up regatta, qualifying rounds from 3 to 8 March, and the final from 10 to 12 March. The event is dedicated to under-25 crews from all over the world representing their respective yacht clubs, and will be held across three legs over the course of 12 months. The first two appointments will be in Italy while the final will take place in Hong Kong in 2022.

Young Azzurra will return to Lake Garda between the end of April and the beginning of May for the first regatta of the Persico 69F Cup circuit. The other events will take the YCCS crew to Porto Cervo in early July, where they will make their racing debut in home waters.

“The Young Azzurra project gives us positive motivation for the beginning of this new year, with the team facing an intense sporting programme. We are aware that the health crisis is still ongoing, and as always we will monitor developments carefully, ensuring maximum safety for our athletes. That said, we hope that all the events on the calendar will be able to take place and that our young sailors can grow professionally and personally through this new sailing adventure.” commented Michael Illbruck, Commodore of the Yacht Club Costa Smeralda.

“We are really happy to be able to get back on the water!” added Ettore Botticini, skipper of Young Azzurra. “During the months of the winter break we had a personal trainer to ensure we could start practising again in the best possible physical shape. Not all the team members have had the opportunity to train on the water, so we will get back into the game focusing on technique and reasoning, optimising the time we have available before the Youth Foiling World Cup. We have very challenging races ahead, this is a great opportunity for us to compete against teams from all over the world. We can’t wait to get started so that we can implement all the new ideas and processes that we’ve been studying ashore recently!”

For more information or to schedule interviews with YCCS management or members of the Young Azzurra team please contact the YCCS press office.