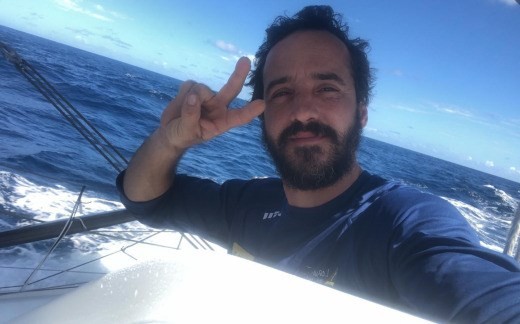 Louis Burton, now up to second, is starting to see his westerly route pay a dividend. He has negotiated the western side of the high pressure zone quickest and into the weekend should see his gains continue, sailing faster and back on a more direct route. He has a narrow band of breeze to work but his position, some 70 miles north of the latitude of Charlie Dalin (Apivia), right now looks like he might overhaul Dalin when they converge near the Azores.

The gap will not be that much, one way or another. But Burton looks like he has five knots more wind where he is and the slightest increase in pressure allows him to pull the bow down and go faster more directly towards Les Sables d’Olonne, sailing low and more directly (145-150 ° of the true wind) under a spinnaker or higher and faster (at 135-140 °) under gennaker with two to four knots more speed.

But the boats on the inside of the curve can still have their say, to the east there is Damien Seguin (APICIL Group) or to a lesser extent, Thomas Ruyant (LinkedOut), Yannick Bestaven (Maître CoQ IV) or Giancarlo Pedote (Prysmian Group) but more and more it looks like Boris Herrmann (SeaExplorer-Yacht Club of Monaco) who is on the same course as Charlie Dalin’s continues to be very fast.

But with 2000 miles to the finish there is less than 200 miles between the top seven, two of them carry a time bonus for having participated in the rescue of Kevin Escoffier. Herrmann has six hours, Bestaven 10 hours 15 minutes. And Jean Le Cam (Yes We Cam!) at 300 miles or so from the leader carries 16 hours 15 minutes with him. And so the ultimate outcome of this Vendée Globe looks very uncertain. The weather conditions to the Azores are not simple: the SW’ly flow is not strong (around fifteen knots), not all the skippers have a spinnaker, some have technical problems (foils, sails, structural fatigue, etc. .) and the optimal route is far straightforward.

The passage approaching the Azores islands on Sunday is not so easy: there is a tidal current, the sea is often chaotic when approaching these volcanic islands and the winds are generally disturbed by the mountains, like the Pico volcano which rises to 2,351 meters. Nothing is easy on this Vendée Globe.

Boris Herrmann reported yesterday evening, “We have found ourself some good breeze in the high pressure ridge, sometimes we have been up to 22kts and now have 15kts to 19kts of breeze, so it is not so easy to have deep sleeps or good naps for me I am on it all the time but right now I have flat seas and dream conditions, all the time we are on the right course and it is a good day. I think Louis Burton there has a fantastic option there to the north there and he is managing to get to the other side of the ridge, well done to him, let’s see how it pans out but normally we have one and a half days of this light stuff and then Sunday we are into low pressure train. My dream is aft ballast aft stacking, small gennaker, two reefs, one reef, and just send it home with no sail changes. If I stay on the fractional halyard, the change between the jibtop and the small gennaker is a long, costly change so I was thinking how to change because I so much enjoy sailing on the fractional than the masthead. So there is still plenty of way ahead of us, I can’t promise we stay on the podium and I don’t think this is the right moment to discuss this but we do our best, I do my best, but it is a bit of destiny, what comes out of it well I think everyone in this top group is just the same, looking to sail as best they can, and then it will be very close. “

Listen to a new audio from Sam Davies, who is completing her circumnavigation outside of the course, it is in the audio section of the website.