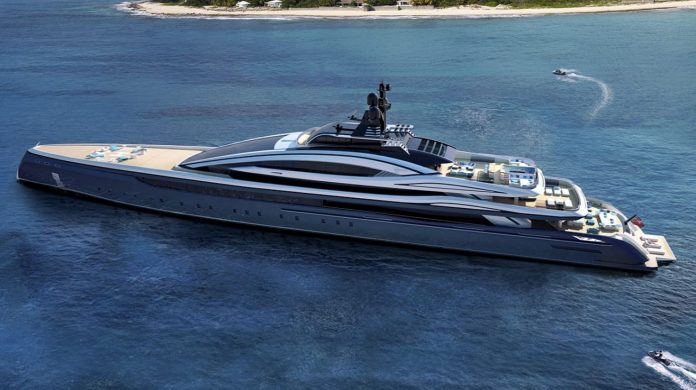 Why do we love superyacht designs so much? It may be because they show us how some selected few live their lives; or maybe the daydreaming that comes with them. Whatever your reasons, take this next example as an absolute standard of what a superyacht should look and feel like.

It’s called the Crossbow 100, with the 100 standing for its length in meters, which is about 328 feet; 328 feet of ship folks! That’s basically a ship the length of a football field from end zone to end zone, and then some.

Now, anytime you see anything like this, there is rarely only one person behind all the aspects of the design. In the case of the Crossbow, that would be two entire teams. The first team to work on the design, which was mainly responsible for the exterior you see, are Italian naval architects Hydrotec. If you don’t know much about them, you just probably don’t have access to that lifestyle, sorry. They have been designing boats, yachts, and superyachts for over 25 years now.

The second team to work the Crossbow is also Italian, the Isa Yachts shipyard. Other than the experience of putting together a fully doable interior, not much else is needed to say about this team. But why would two real teams get together and create a concept? The answer is quite simple. A collaboration like this means that this vessel has been designed in order to one day become the real deal.

It’s so ready to go that even the engines have been chosen in case its construction is commissioned; we’re talking two MTU 16V 4000 M93l units. They are enough to propel this aluminum hull vessel to a maximum speed of 25 knots, which is pretty dang fast for something this big.

One of my favorite aspects about the vessel is the massive flat deck we find at the front. Aside from being used as a helicopter landing pad, this space is just perfect for massive dance parties. But if you feel like storing the chopper, this part of the deck opens to allow for the helicopter to be lowered underneath, leaving the deck free for whatever you have planned. If the fun’s over and everyone just wants to chill, clear it out again and set up some lounge chairs, beds, and pillows. It seems that even the designers had this specific purpose in mind.

From this point of the ship, if we look aft, a massive glass wall also acting as a windshield offers full forward visibility for two entire decks of the superstructure. Speaking of a superstructure, this one is just magic. Sleek long lines begin near the bow and extend aft beautifully, creating more leisure space and an already designed interior. Remember, this ship is just waiting for the right moneybags to come along.

The highest deck on the ship is, of course, the owner’s deck. I’m not going to get into the interior of the ship as the eventual customer will most likely end up changing it all to his or her taste, but the owner does have their own jacuzzi and outdoor lounge on their private deck.

Below we see another space for lounging and even an outdoor bar, while the lowest deck seems to be reserved exclusively for lounging and socializing. One last thing is the inclusion of another garage at the rear of the ship. This space is reserved, as with most other vessels of the sort, for water toys and anything else that may be needed for sea-faring fun but can also be used as a sun deck.

As mentioned, I won’t be going into any details regarding the interior, as most regular folk like us won’t even get to see the inside of something like this. It sure is nice to look at and dream a little, though.

Facebook
Twitter
Pinterest
WhatsApp
Previous article
Burton is starting to see his westerly route pay a dividend
Next article
A Mercedes Benz-Inspired Research Yacht? It Had to Happen, Eventually