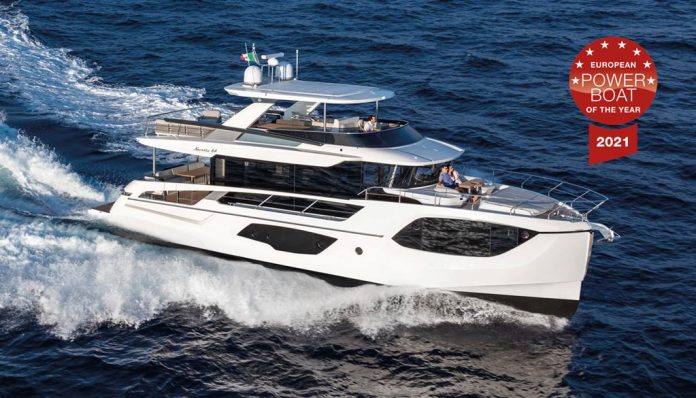 After a successful nautical season for the shipyard and its models, Absolute Yachts has achieved another international award. Navetta 64 won the first place in her category during the 16th edition of the European Powerboat Award 2021.

This is the third award received by Navetta 64, recently she has won the Best Of Boats 2020 in the category “Best for Travel” and the World Yacht Trophies as “Best Innovation.” On this occasion, the 5 selected categories arranged the nominees depending on their length which is up to 20 meters.

The jury opted for the Absolute Navetta 64 because “she embodies the perfect combination of flybridge powerboat and explorer [… and] provides plenty of space both in her interior and on deck. Large window frontages, as well as the innovative execution of the stern cabin with direct access to the swim platform, convey a unique sense of lifestyle on the water.” Navetta 64 – the Absolute Pathfinder – was awarded by an international jury specialized in the yachting industry, a panel of judges composed by journalists and editors-in-chief of the leading European motorboat-magazines: Båtmagasinet (Norway), BoatMag (Italy), BOOTE (Germany), Motorboot (Netherlands), MoteurBoat (France), Nautica y Yates (Spain), Neptune (France), Marina CH (Switzerland), and Yachtrevue (Austria), representing more than a million readers monthly across Europe and beyond. The qualified jury and the prestige of the competing brands make the European Powerboat Award among the most important awards worldwide.

Among the evaluation criteria, parameters such as workmanship, safety, driving behavior, design, space distribution, and price-performance ratio played a fundamental role during the nomination and voting process. One of the most appreciated new features was the transom, usually a mere storage space – at least on yachts of this segment. On the contrary, this model has achieved the highest livability, both at day and at night. Moved at the stern, this area has become a large space, unusual on boats of this size. Beach club by day and double cabin by night: an actual extra VIP cabin, right on water.

“We are delighted with this recognition, which helps to confirm and increase the value of Absolute and its models worldwide. We will continue investing in quality and innovation as we are sure that ambition is a necessary ingredient to create a product not only for our customers but for the entire yachting sector”, declared Sergio Maggi, Absolute’s founder, Vice-President, and Head of the R&D department.