Beyou set to complete Vendée Globe voyage of self discovery 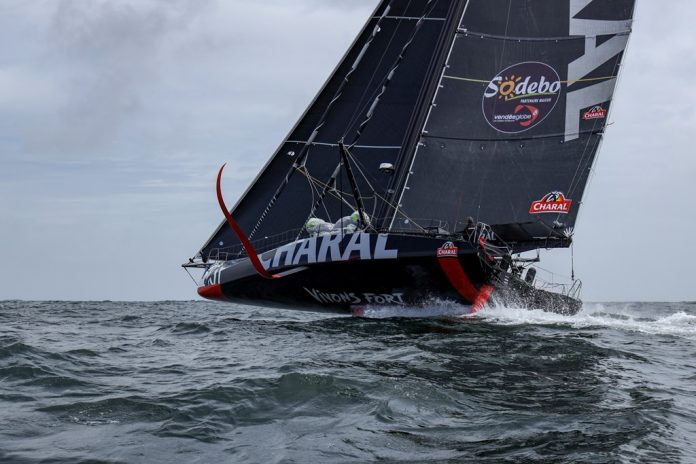 Just before Jérémie Beyou and Romain Attanasio are expected to cross the finish line tomorrow in 13th and 14th places respectively, the Franco German skipper Isabelle Joschke has now left Salvador de Bahia Brasil today heading for Les Sables d’Olonne to complete her first solo circumnavigation hors course. Meantime in the north Atlantic a six way match promises to be particularly exciting. Even after nearly 90 days of racing on the Vendée Globe there are still many places to be decided and intense, head to head contests going on.

Two finishers are expected at the weekend, most likely both on Saturday. After being forced to return to Les Sables d’Olonne and restarting more than nine days after the race’s November 8th original start Jérémie Beyou (Charal) should complete his heroic race of self discovery and finish in 13th place.

Some six to eight hours later Romain Attanasio (PURE – Best Western Hotels & Resorts) should also complete his second Vendée Globe. Both have been slowed today in lighter winds. Beyou today is about 120 miles North-East of Attanasio who reflected today on a climb back up the Atlantic which has been so much harder for him than in 2016.

“I know that we shouldn’t think about it the finish but I can’t help it”.  Attanasio skipper of PURE – Best Western Hotels & Resorts, “I can’t wait to be finished.”
He has been suffering problems with his wind information anemometer and at the same time still constantly watching for marine traffic in a busy area.

“It’s the worst ascent of the Atlantic that I’ve ever experienced and there are difficulties to manage right up to the  finish line”, he said today, but chuckled to himself : “But here we are I know I’m going to have tonight as my last night on this Vendée Globe, so let’s hang in there. “

Beyou on Charal is expected at around 0730hrs-0800hrs UTC this Saturday morning according to the latest routing predictions. PURE – Best Western Hotels & Resorts is expected to arrive in the evening (between 1600hrs and 1730hrs UTC).

One hell of a battle behind.

“It’s incredible to be so close again after 89 days at sea. I am giving it everything just now even if I am tired and the boat is tired. Right now I am focused on making any places I can but to be honest once I am finished I will not be worried if I am `17th, 18th or 19th, it is about finishing the race, completing the circle.” Said Le Diraison today.

“They have gone around the high and are now benefiting from a good downwind flow,” notes Sébastien Josse, Vendée Globe weather consultant. The good news for all six is that the lows which were especially potent seem to have lost their energy and should make life a little easier than first expected.

After being forced to abandon in early January following damage to the keel rams of her MACSF,  Isabelle Joschke has been in Salvador de Bahia, Brazil, where she and her team repaired the rams. She left the Brasilian port today solo, intending to ‘complete the loop’. The boat will start again, but not with 100% of its potential. She will meet up with and sail for Les Sables d’Olonne alongside Sam Davies, who is also out of the race. The duo are expected back in Les Sables d’Olonne between 19th and 20th February.