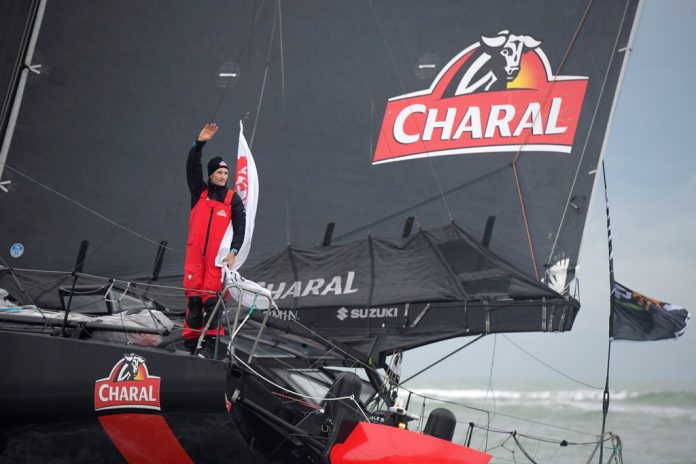 Jérémie Beyou, who was one of the outstanding pre-start favourites to win the Vendée Globe crossed the finish line in 13th place today (Saturday 6th February) after having had to return to Les Sables d’Olonne because of technical breakdowns and restart over nine days after the fleet started on Sunday 8th November. The skipper of Charal finished at 08:15:58 hrs UTC this Saturday 6th February in an elapsed time of 89 days, 18 hours, 58 seconds. He finished 9 days, 15 hours, 12 seconds after winner Yannick Bestaven.

Beyou made a valiant effort to recover as many places as he could. But his fourth attempt at the solo non-stop round the world race proved an extraordinarily different challenge to what he had hoped for. Nevertheless for the highly competitive sailor whose major focus in life over the last four years has been to win the Vendée Globe his comeback through the fleet is a major accomplishment which has earned him huge respect among his peers and race fans alike.

Rather than taking on his rivals, fighting for victory head-to-head against the other competitors, this race was about an internal battle for Beyou, a race of self discovery learning new and different aspects of racing, not least patience and self motivation as he raced most of the first month of his Vendée Globe entirely on his own, chasing to catch up the tailenders. Indeed it was only just before the Cape of Good Hope that he was able to finally pass the first backmarker.

Beyou’s campaign had all the hallmarks of a race winning programme. The three times winner of La Solitaire du Figaro admitted he learned a lot about how to sustain high speeds and push very hard in the south as a member of the Volvo Ocean Race winning Dongfeng race team. He has has a well funded well structured team, backed at least until 2022 by Charal,  a latest-generation boat designed and built before the others (it was launched first of this generation in August 2018) which has benefited from two years of fine-tuning and two seasons of racing. Successes included a podium finish in the Transat Jacques Vabre racing with Christopher Pratt and July victory in the Arctic Vendée Les Sables d’Olonne.

At 44 years of age Beyou was third in the 2016-17 race on his last participation in the Vendée Globe and was setting himself up to win.  But technical problems after just three days racing decided otherwise.

On the evening of 11th November off Cape Finisterre, after topping the rankings on several occasions Beyou suddenly announced that he was making a U-turn. He sailed back fast to the port of Les Sables d’Olonne to repair, among other things, a snapped starboard running backstay a damaged rudder and some sundry essential composite repairs.

The rules allow him to come back only to the start port. There his team are waiting to evaluate and put in placed an immaculately executed pit stop back at the race pontoon. Working around the clock he had until 18th November 14h20 to start the race again.

“What is hard is the decision to turn back. You know that you are immediately being forced to give up all that you have concentrated on during four years of preparation.”  said a seemingly broken and defeated Beyou on his arrival at the Port Olona dock. “Now, seeing everyone here again, it brings back a big dose of emotion and it’s not easy to deal with it, really I’d rather be anywhere but here.”

The extended team of experts worked miracles. Among other damage a partial bulkhead in the cockpit also needed to be repaired. But on 17 November at 5.10 pm local time it is mission accomplished, Charal crossed the starting line for the second time.

And meantime the fleet on its ninth day at sea was led across the Equator by long time title rival HUGO BOSS skippered by Alex Thomson.

Beyou’s race was a new and different. He set up and appreciates small daily targets. He needed to find reasons to push hard and take pleasure and satisfaction from what he does in his own bubble rather than micro-measuring himself all the time against rivals and the rankings, “I’m discovering a side of my sport that I didn’t know about” he revealed.

For almost a month, he will sail totally alone, in pursuit of the tail of the fleet. The weather in the South Atlantic is not good for him but in early December he is into the Roaring Forties and  he overtook his first competitor (Stark) on the 11th, before crossing the Cape of Good Hope.

And into the big south he is pleased to finally be in the race fleet, albeit further back than he would be used to, but the skipper of Charal is pleased to be surrounded once again by competitors. The sinking of Kevin Escoffier affects everyone in the fleet and everyone values the importance of sailing in company in the Southern Ocean wastes where the competitors around each other are one again proven to be the best guardians of each other.

In the Indian Ocean Beyou confides: “I really try not to load the boat too much and to be a bit more in gliding mode than pushing hard. My real objective is to round Cape Horn with a boat in good condition”.

So he doesn’t force himself or his boat, does not go for super high speeds. But he does, one by one, take seven places.

At the entrance to the Pacific Beyou has caught up with the next group and then passed Cape Horn in 17th position in the company of Arnaud Boissières and Alan Roura, whom he would overtakes off Argentina.

On the way he also admits to discover the simple joys of communicating with his rivals around him, comparing ideas and chatting lightly and more freely with fellow competitors, something which is otherwise alien to someone most used to silently battling at the front of the fleet.

He gradually comes back to the level of Romain Attanasio, who suffers in the doldrums for a very long time.  The two men will sail together for the whole of the climb back up the North Atlantic. They pass together inside the Azores archipelago where they are hit by a big depression. And they finish one after the other hours apart.

Starting 32nd that is to say last when he left the dock again (Nicolas Troussel had already given up) more than nine days behind his fellow competitors Beyou achieved a feat that was never considered one of his targets, finishing in the middle of the fleet. He also took up another challenge the mental one reaching the end of his race and achieving a high level of personal satisfaction when he was never under any obligation, personal or commercial, to re-start.

“One day I would like to win this race. If not this time it will be another time,” he said before the start.

And so Beyou will doubtless be back in four years, a changed and more rounded sailor who has certainly embraced new perspectives this time.

Beyou said
“Psychologically, it was still not easy. You prepare for what is like a lifetime and this time with Charal, with this team, with this boat I thought it should be my time, my chance. And from there you cannot just scrub that from your mind. You have to manage that in your head too, but it didn’t take over and that didn’t prevent me from pushing the boat forward. Positive thoughts finally took over. And in the end you are in the story and you just enjoy the moment. It’s a long experience, you go through all the states of a usual Vendée Globe. And I’m in  much better state today than 80 days ago when I left.

Coming back into the fleet was important, I still felt really isolated after the start. It’s nicer to have competitors, otherwise you’re out there chasing a record and not competing in the Vendée Globe. It was important to catch up, it gives extra motivation when you catch up with the same weather system. Catching up with a competitor happens, yes, but they too sail well. Let’s be clear if they are in the Vendée Globe and qualified for the Vendée Globe, it is because they know how to sail well. When I got to them their speed increased a bit, you could tell they were trying to resist!

In sport you can’t win all the time, especially in sailing. It was Yannick who won brilliantly, but there will be more chances for me.

“I had to do nine Solitaire du Figaros before winning it, I don’t know how many Vendée Globes it will take. But that is my story, but there are other race wins that have come more easily. There is no rule. When you see the final podium today, without wanting to offend anyone, not many people would have bet on it. From my experience I have a hard giving up before I get there, so if it’s going to take nine editions, maybe I’ll be around for a while. I hope to be here for the next edition. When it was time to leave, I could have been  pissed off because that experience was not easy to manage. I went out with humility and discovered the pride of fighting small battles every day. It made me fall in love with this race even more. And with a little frustration of this ranking even more it just makes me want to come back next time.”

Romain Attanasio on Pure – Best Western Hotels and Resorts finishes in 14th
Romain Attanasio crossed the finish line in the Sables d’Olonne at 17:06:02 local time after 90 days, 2 hours, 46 minutes and 2 secnds. Romain overall distanced covered was of 27,596.93 nautical miles which was covered at an average 12.76 knots of boat speed.