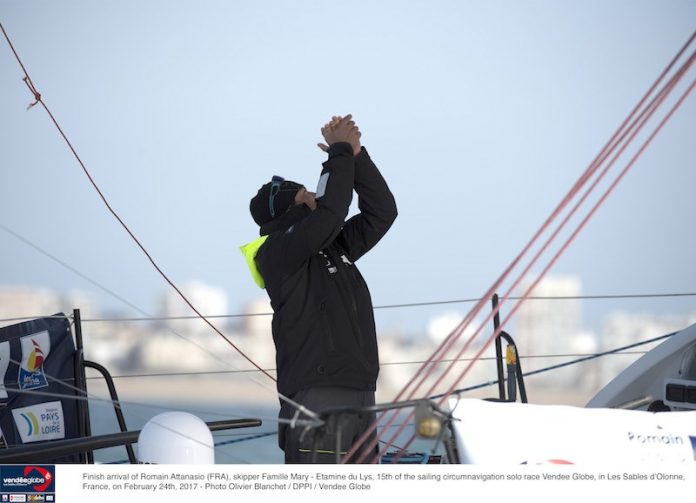 To a great extent 43 year old Attanasio has achieved what he set out to do, completing his second Vendée Globe without major problems and proving himself competitive in the top half of the fleet on a modest budget. As ever Attanasio, whose life partner is Sam Davies has shared his race with enthusiasm and down to earth passion, visibly enjoying and profiting from the tough moments as well as the straightforward racing.

His first Vendée Globe finished up four years ago with a much more distant 15th place in 109 days and 22 hours, more than 35 days after race winner Armel Le Cléac’h. A rudder replacement at Port Elizabeth by Cape Town saw him lose touch the main body of the fleet and Attanasio sailed much of his first race in isolation other than in the latter stages when he had a good race with Didac Costa.
In 2016 his boat was the former La Pingouin, the Lombard design which Alexia Barrier is racing this time.

Before this race Attanasio  explained, “A Vendée Globe is 80% hard work and 20% madness”. It is  to this formula that you have to run your race. Attanasio has lived this race according to these beliefs, always reminding the audience: “I chose to be here. It’s intense, it’s difficult but I am here doing it.”

“My objective? To finish first. And if possible in the first half, before 15th place, that would be good” declared Attanasion pre-start.  So today it is mission accomplished with 14th place, aboard a 13 year old boat, the Farr design which started life in New Zealand at the Gitana Eighty of Loïck Peyron. In 2012 it was the fifth placed mount of Jean le Cam and then as Newrest-Matmut went round in 103 days last edition for Fabrice Amedeo who finished in 11th place -.

The first week or ten days rather dampened his hopes of that top 10 as a succession of small problems saw him lose touch with the main  peloton.

On November 14th, therefore, shortly after rounding the tropical depression Theta, the skipper of Pure – Best Western had problems with his pilots. At the same time a J2 hook (a point of attachment of the headsail, probably the most used on this round-the-world race) and a broken halyard compromised his passage south. And then the mainsail head car gives him problems. Attanasion can no longer reef his mainsail. On November 18th he repairs a process which takes him 11 long hard hours, including a masthead climb which half-traumatises him. He loses three places and many miles.

He spends many days racing closely alongside Clarisse Cremer in the south before they are joined by Armel Tripon. Slowed down after rounding Cape Horn, as he passed through the Strait of Le Maire, Attanasio then found himself alone again for the climb back up the South Atlantic before finally being caught by Jérémie Beyou who he sails with until the finish line.

The skipper of PURE – Best Western shares his race with an enthusiastic infectious good humour and spontaneity. Like that of his climb to the mast, the video of his visit to his “hotel room” or his Christmas, among others are highlights of the Vendée Globe. Skipper, actor, commentator he visibly enjoys being at sea. He even manages to be reassuring when, on January 13th in a depression, he falls on a winch, breaks at least one rib and faints. “Nothing serious, it happens to me a lot! “His injury didn’t prevent him from holding with Charal for the last few hundred of miles. His finish today Saturday is a well deserved 14th place.