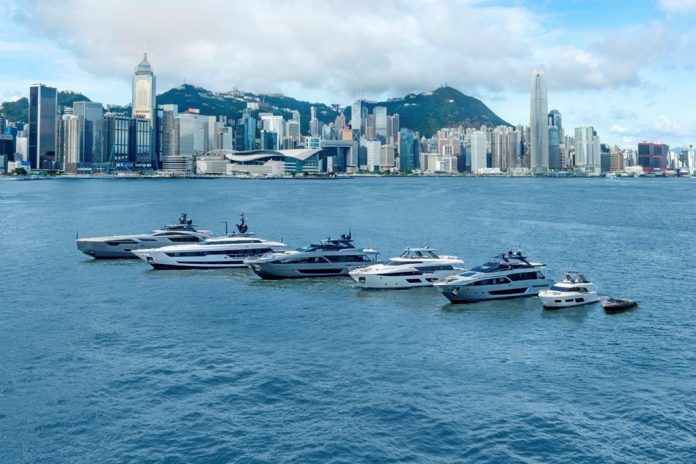 Ferretti Group adds another six gleaming trophies to its already impressive record, confirming once again the brand’s pre-eminence in the Asian yachting market.

Ferretti Group triumphed once again at the Oceanway China Yacht Annual Awards, held in Zhuhai, China on December 11 in the presence of well-known experts in the sector. Four yachts received major awards for outstanding design, technological solutions and style.
Ferretti Yachts 500 was victorious in the “Best Exterior Design (50ft-80ft)” category thanks to its sleek aerodynamic lines, while Riva 50 Metri was acclaimed in the “Best Yacht of the Year (40-70m)” category as a masterpiece of marine engineering in steel and aluminium. Another magnificent winner was Riva Dolceriva, the innovative open yacht from the famed Sarnico shipyard, judged “Best Yacht of the Year (30ft-50ft)”, while the CRN Mimtee, a 79 m full-custom megayacht, took the “Best Exterior Design (over 70m)” award for the softly sleek and well-defined lines of the hull.

Further satisfaction came from the Robb Report China, which on December 25 in Beijing judged Riva 88’ Folgore to be “Best of the Best” in the “Yacht of the Year 2020 (below 100ft)” category. The new Riva sport-fly was seen as an exciting synthesis of innovative vision and the stylistic traits of the Riva legend, an exceptional yacht that has conquered the hearts of owners all over the world. Promoted by the Chinese edition of the exclusive lifestyle magazine and arbiter of excellence in the international luxury market, each year this awards system selects the best products in 12 different categories in the luxury sector.

Lastly, for the eighth year in a row, Ferretti Yachts was acclaimed “Best Luxury Yacht Brand 2021” during the prize- giving ceremony at the 17th Hurun Best of the Best Awards, held in Shanghai on January 28. The awards are made on the results of the Hurun China Luxury Consumer Survey 2021 conducted by Hurun Research Institute, the authoritative organization run by the famous business and lifestyle magazine that’s been ranking China’s richest since 1999. Specifically, Ferretti Yachts was chosen in 2020 by a male public that was 4.9% up on 2019. Further, the brand found the strongest consensus among the 31 to 45 and over-45 age brackets, endorsing yet again the Group’s successful branding and sales strategies in China.

In a particularly fraught year, Ferretti Group continued to stand out with exclusive craft that have significantly influenced the yachting world. Its successes have augmented the Group’s already dominant status in an increasingly competitive and strategic market like Asia.