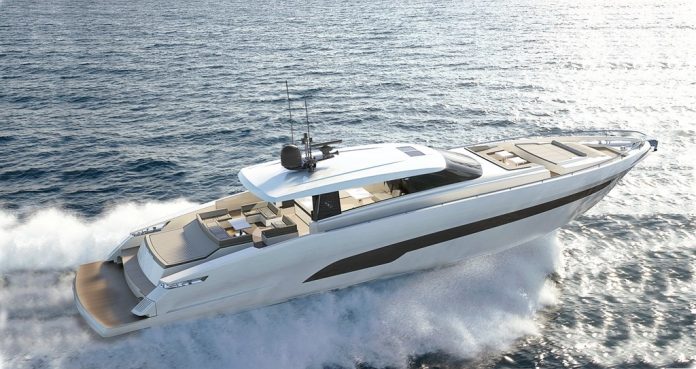 In the rebranding process, which began in 2020, Austin Parker Yachts, after the launch and sale of IBIZA’s  44 WA, 52 WA and MAHON 54 MY models, started the production of a superior class yacht, the IBIZA 85.
This flagship of the shipyard is a 27-meter sporty style yacht, that encompasses class, distinctive style and innovative solutions with design and technological proposals never used before on a boat of this size and fully custom.

The yacht, of which the first unit has been sold, is in an advanced stage of construction, with launch scheduled for next June.
The close partnership with the Fulvio De Simoni Yacht Design, which designed the entire line, has allowed us to create a yacht that encompasses both the wishes of the Owner and the requests of the Shipyard, proposing an out of the ordinary layout, not only for the design and partitioning of spaces but also for the technical solutions adopted on board.
The layout suggested by the design lines is streamlined, elegant and sporty and does not let you imagine the enormous spaces that have been created in the cockpit, deckhouse and above all below deck.

Unlike other sports boats, dedicated exclusively to young customers, the IBIZA 85, thanks to the technical solutions adopted on board, is also the ideal boat for more mature owners.
The first striking feature is the possibility of transforming the freedom created by the total opening of the saloon (in continuity with the huge cockpit that measures 15 meters in length, between the helm station and the bathing platform), into a “sedan”, simply operating with electric controls and hydraulic movement: 2 side windows and the large glass door at the stern close and protect the saloon, emerging from the “retractable” position.

The cockpit is equipped with a sundeck, under which there is the hangar that houses the tender and other accessories, as well as a dining area with a central table and 10 seats.
Under the streamlined hard-top, sofas and furniture equipped to serve the dining area and equipped with refrigerators and freezers.
The helm station, as befits a yacht of these high standards, has 2 pairs of seats, all independent, to accommodate the pilot, co-pilot and two guests in comfort and safety, considering the acceleration and performance that are achieved.

The bow is accessed through comfortable and safe protected passages, walk-arounds, on the same floor as the saloon, to best access a large area equipped with a “U” shaped sofa, two convertible tables, sundecks and 4 facing chaise lounges.

A beam of  7 meters, combined with a length of 27 meters L.O.A. of the boat, made it possible to satisfy the owner’s requests to obtain 5 independent cabins (3 double, 2 twin) each equipped with bathroom and shower, a large kitchen and 3 crew quarters, completely separate and equipped with independent services, enhancing endless possibilities of the custom construction.

As a true sports motor yacht, the IBIZA 85 is equipped with 2 latest generation 2000 HP MAN engines and Arneson surface transmission group n°15 which gives the boat an estimated cruising speed between 38 and 40 knots with a maximum of 45.