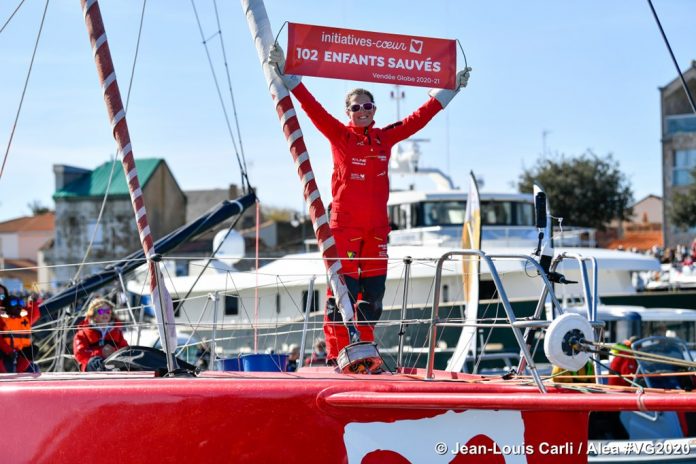 After being forced to abandon her race on 5th December following a violent collision with a floating object south of Cape Town two days earlier, British skipper Sam Davies sailed back into Les Sables d’Olonne in beautiful spring sunshine to a rapturous welcome this afternoon. Thousands of well wishers turned out to line the quaysides of the famous Les Sables d’Olonne channel to pay tribute to an inspirational, courageous solo round the world passage fulfilling her pledge to complete the Vendée Globe route outside of the race rankings.
After arriving back off the Vendée coast late last night the French-based English skipper took advantage of the time and the perfect conditions to scribe a giant heart shape on the race tracking map with the course of her IMOCA 60 Initiatives Coeur that she sails in the colours of the charitable organisation which raises money to facilitate heart surgery for youngsters from third world countries.

By continuing and completing the out-of-the race circumnavigation Davies maintained the huge public support for the Initiatives Coeur project, her efforts across the whole Vendée Globe circumnavigation project has raised over €1.2m to fund over 100 surgeries.

Considered by many race experts to have had the potential to finish on the podium, the hugely experienced 46 year old Davies was in great shape when she was forced to abandon. On the night of 2nd December she was among the leading peloton sailing at over 20 knots when the collision occurred. He IMOCA 60 Initiatives Coeur was stopped instantly by the sudden impact which threw her across the inside of her boat, injuring her ribs.

Davies dealt with the huge disappointment as best she could. Her perfectly planned and executed four year campaign was terminated in an instant. But 36 hours later, when speaking in the sunshine in the shadow of Cape Town’s Table Mountain – bravely wearing her typically broad smile – she pledged to return to sea and complete her solo voyage.

“In my head the race was dead I had stopping sailing, I had retired, I already could picture myself at home wearing my little dress ready to pick up our 9-year-old son, Ruben, from school and being back to making food at home.” She told the media in South Africa, “And then after 24 hours had passed in aboard my decompression chamber where I should have been saying to myself ‘I’m quitting, I’m retiring’…..well instead of that I changed my mind. I came to my senses.”

“It is obvious.” She continued then, “Finishing the course out of the race makes sense. Initiatives-Cœur is a solidarity project. And that’s what gives me the strength and the energy to start again.”

After round the clock work by her technical team, supported by a posse of local Cape Town ocean racers and boat builders who worked tirelessly to effect the necessary repairs, Davies was back on the water on December 14th ready to take on what has amounts to one of the biggest and toughest personal challenges of her 20 year professional sailing career.

On leaving Cape Town she said, “It is a new adventure. I am not used to sailing solo like this. I am super happy to be able to re-start. The main objective is to continue for Initiatives Coeur that is my main motivation. We have had some much help here and a lot, lot, lot of positive energy and support to send me on my way. I can see where the others are but that is not my objective to catch them, I am not putting myself under pressure to catch anyone.”

Sailing prudently to look after herself and her boat, Davies has profited from the new and different challenge, often saying she has remained motivated through the hard times by the thinking of the work that the project does.

When she returned to the south Indian Ocean she was more than 800 miles behind Sébastien Destremau and Ari Huusela but was in close contact with French skipper Destremau – who had constant technical problems – by the Kerguelen Islands and by Cape Leeuwin was 80 miles from the Finnish skipper Huusela. She sailed most of the Pacific Ocean to Cape Horn close to Alexia Barrier and Huusela, rounding Cape Horn on 25th January.

While passing off the Brasilian coast Davies reconnected with her long time friend and rival Isabelle Joschke who is also returning to the course – like Davies outside of the rankings and rules – after the Franco-German skipper had to abandon due to keel ram failures. The pair stay in close and regular contact, enjoying the safety and solidarity pursuing the same goal together until they arrive back in Les Sables d’Olonne.

Back in the north Atlantic in the NE’ly trade winds Davies lost her forestay and with it her J2 headsail on the 11th February, her quick thinking saving her rig. But her approach is compromised still further and she has to reduce speed at times.

Like Joschke yesterday, Davies returns to Les Sables d’Olonne, having achieved her own personal victory, completing her third round the world passage and for sure laying to rest some of the ghosts of a Vendée Globe disappointment which would doubtless have remained with her for years. And as a sailor who still loves being afloat as much as she every did, she will have profited from her experience.

Before the start she said,

“I have always promised myself that if there is one day that I get up and I don’t want to go sailing and I am complaining, grumbling and that I am doing it just to make money, I’ll stop and do something else. I love sailing so much, I really want it to be always a pleasure.”

Sam Davies and her Vendée Globe
Since taking over the reins of the Initiatives Coeur programme from Tanguy de Lamotte and with it the helm of the 2010 VPLP-Verdier design which was second as Banque Populaire VII in 2012-13 and third as Jéremie Beyou’s Maître-CoQ, Sam Davies has raced on the IMOCA Globe series and in major races with considerable success, thereby underlining her potential on this Vendée Globe.

Fourth in the Vendée-Arctique-Les Sables, seventh in the Transat Jacques Vabre, Davies was fourth in the Bermudes 1000 race and won the Drheam Cup in 2018. Having accumulated a massive ocean racing experience ever since first racing the Mini Transat 20 years ago, now amounting to more than 25 Transatlantic passages, her fourth in the 2008-9 Vendée Globe and skipper Team SCA to sixth in the Volvo Ocean Race in 2016, saw Davies very firmly established as a sailor with a programme capable of a top result from the 33 strong fleet.

A mechanical engineering graduate of St Johns College Cambridge, Davies is an accomplished, forward thinking technician in her own right and made smart decisions in optimising her boat for herself, not least in her advanced autopilot system, her foils and sail set up.

From a solid start she took a moderate, middle course and at three days into the race was pacing close to Charlie Dalin (APIVIA), alongside Kevin Esscoffier (PRB) and Alex Thomson (HUGO BOSS). She was eighth at the passage through the Azores and takes a safe but fast route at Tropical storm Theta. At the Equator she was ninth, alongside Boris Herrmann (Seaexplorer-Yacht Club de Monaco).

By the 25th November she is forced to stay to the west of the South Atlantic high pressure system, slightly losing contact with the lead trio who are afforded a more direct downwind passage towards the southern ocean.

But with Louis Burton, Davies is one of the first to gybe directly south to connect first with the train of eastbound low pressure systems and almost immediately profits, gaining miles back on the leaders and closing back at Kevin Escoffier.

It was on the night of the 2nd December that her race was suddenly brought to a premature end. Lying 11th, making some 20kts and some 350 nautical miles SSE of Cape Town she was inside and just starting to eat her dinner when the boat struck something, coming to an immediate halt.

“My speeds were between 15 and 22kts and I was actually just making a hot meal after the gybe and the stack and everything and it was just starting to get dark. I hit something. I did not see anything”

“It was as if I had run aground on a rock at the time. The boatspeed went from 20kts to zero. The boat nosedived on the impact with the keel. I knew it was the keel. I heard a crack coming from there. I and everything else flew forwards, including my dinner which has repainted the entire inside of my boat. Everything moved. I went flying into a ring frame, luckily, because that could have been worse. It was really violent. But luckily I have just hurt some ribs. It is not serious but really painful. But I stopped the boat, dropped the main, and went to check around the keel, the bearings and the bulkhead. The bulkhead, the main bearing bulkheads (which support the keelbox)  are intact as far as I can see. The keel bearings are intact. The longitudinal structure around the keelbox is all cracked. That has taken the shock of the impact of when the boat moved, that is cracked on both sides.”

Just before finishing today Davies told the IMOCA class, I love sailing and I love my boat and I thought it would be cool to just cruise around the world. But actually it was really lonely. Over the past few years I’ve got more and more competitive and I’ve been lucky to have an amazing boat with an amazing team and had really close racing with Boris (Herrmann), Kevin (Escoffier), Isa (Joschke) and all that group who I was with until I had my crash.”

The Riva Lounge on the Waterfront in Porto Cervo: Welcome to a world of style and elegance