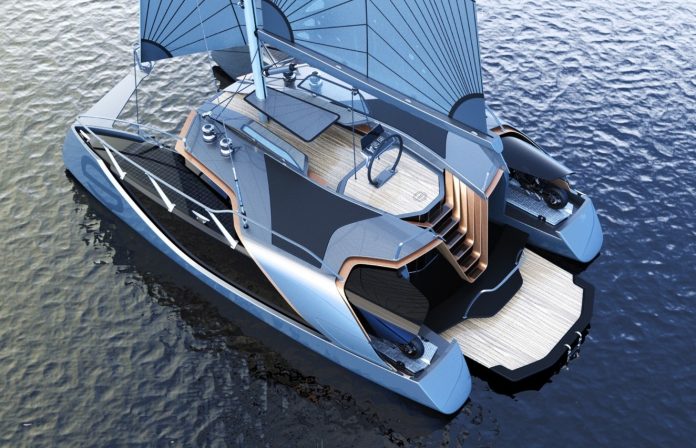 What we’re witnessing is known as the Sunbeam ConceptONE, created by two designers, Maximilian Troicher and Anja Didrichsons.

To make things easier, we can just start with the catamaran that we see. What, you thought it was something else? Nope. If we look closely, we see two separate hulls being held together by a central platform, classic catamaran style. But this little bugger also includes a wind sail. Why? Because it’s one big chunk of eco-friendly goodness.

Aside from the wind-driven propulsion, if we look even closer at the tops of the hulls, we can see a huge number of photovoltaic cells. There’s only one thing these babies do, and that is generating electricity for the engines and any other electrical equipment.

Speaking of equipment, note that this catamaran is meant for your average adrenaline junkie millionaire. We’ll just say they aren’t billionaires, for now. Being such a toolkit for toys you know it’s bound to unleash a ton of fun in the sun. Oh, it does!

To the aft of the Sunbeam we can see what looks like a couple of motorcycles. It’s here that part two of this conceptual idea comes to the surface. These two rides are not your average motorcycles you just take out for a Sunday cruise. They’re actually a pair of modular bikes that can function on classic asphalt, but also surf some Caribbean waves.

That’s right folks, these puppies can also be taken out for a joy ride in the local bay. How? It’s simple. The designer’s included an amphibious function for each of the motorcycles as to allow them to also be ridden alongside the yacht. Or anywhere else for that matter.

This is done by replacing the rear wheel with a modified version that includes a number of extended treads forming paddles. This tire is also much larger than its asphalt-destined twin.

To offer support and some sense of turning ability, there’s also a pair of skis strapped to the chassis and the front wheel. It’s these two skis that help spread out the surface area of the bike and keep it moving along smoothly without sinking into the local waters.

Sadly, this concept only exists as a render, but some of the tech and ideas can and probably will be seen some day.