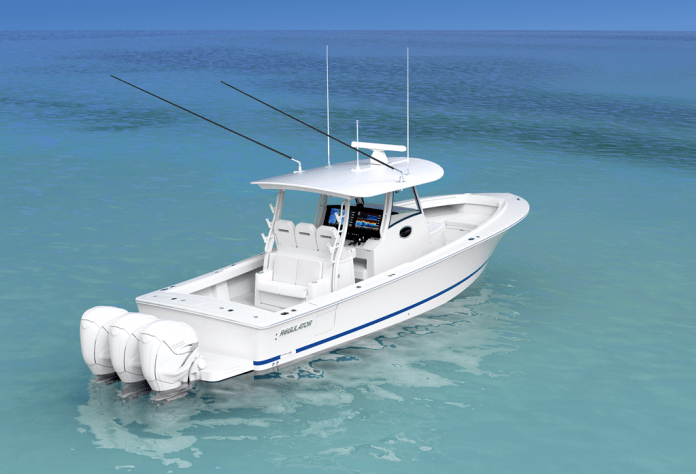 Regulator Marine announced the full details and features of the new Regulator 37 this morning, unveiling renderings that showcase the next evolution in one of America’s favorite center console sportfishers. Powered by triple Yamaha XF425 engines with Helm Master EX, and boasting 507 gallons of fuel capacity, the 37 is ready for offshore action. Proprietary Regulator MyHelm technology, big boat pump room, and newly-designed seating and tackle center are just some of the features that showcase the expert engineering and craftsmanship that make this 43-foot-plus ride a standout in its class.

“Every new model we introduce marks a new opportunity to give our customers more of what they are asking for as we stay true to our heritage and deliver the ultimate Regulator Ride,” said Joan Maxwell, president and co-founder of Regulator Marine. “The 37 brings this thinking to the next level. We are so excited to get this boat out on the water this spring!”

Below are a few key features of the new Regulator 37, all of which complement the quiet strength and smooth ride that have set Regulator apart since 1988.

New Offshore Command Center features Garmin Multi-Function Display with Digital Switching and Monitoring, along with proprietary Regulator MyHelm interface to seamlessly and intuitively connect key functions including engines, lighting, livewells, macerator pump, and more – all via touchscreen. Wireless Key Fob allows you to turn on lighting, batteries and other convenient systems as you approach or disembark with the touch of a button. Critical functions including horn, bilge pump and nav lights are still fully accessible on the LED push button switch panel, with manual override zones to ensure certainty in any condition.

The Regulator 37 will be formally unveiled at the Suncoast Boat Show in Sarasota, Florida on April 23, with advance virtual access across Regulator’s digital and social channels.

A brand-new category of sporty, comfortable dayboats will hit the water near Piraeus later in April, when Technohull launches its new 7.8m...
Read more
Boating

X Shore, a Swedish brand driving the future of electric, connected and sustainable boating, is making its debut in the United...
Read more
- Advertisment -