In a week, the second edition of the Venice Boat Show 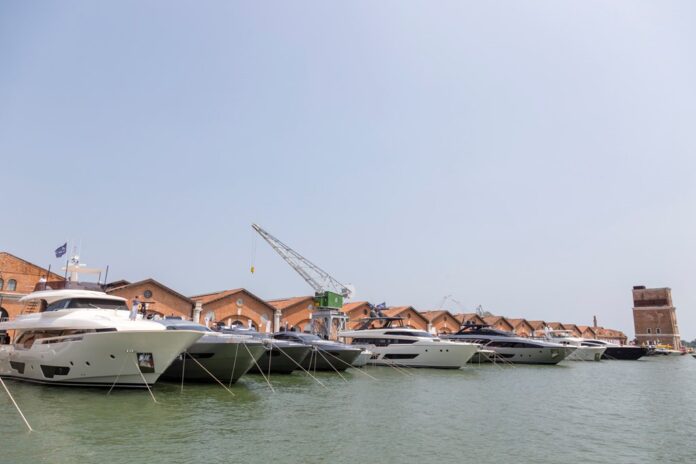 The Arsenale is almost ready: the second edition of the Boat Show takes shape with the arrival of the 220 boats and 160 exhibitors who will start the exhibition from Saturday 29th. Once again “naval art comes home”, a claim that does not age and that finds new reasons in this late spring in the Lagoon. The city comes back to life and the Salone opens a few days after the opening of the Architecture Biennale, these are two important signals also for the whole nation, as underlined by the Mayor Luigi Brugnaro who said: “At the Salone there will not be only pleasure boats , we will also have work boats, service boats, transport boats, we want to represent everything that sails. Where better than in Venice to discuss energy transformation, environmental impact, nautical design? In short, the Salone will also be a place for debate on how to renew and change our relationship with the sea ”.

Since the first edition, the Venice Boat Show has shown its vocation to address a new rapidly growing market that turns to the East, completely natural in the city from where the ancient Silk Road and all the frenetic trade with the East started. European and the Middle East. Ferretti Group CEO Alberto Galassi, who has always believed in Venice for its events in this regard, has very clear ideas: “In practice, there are no boat shows from Lebanon to Venice, passing through Turkey, Greece, Croatia, Slovenia – says Galassi – There is a good half of the Mediterranean that now has the possibility of having a single Boat Show. We are grateful to Cannes, to Montecarlo for what has been done in recent years, but with all due respect I also choose Venice, I don’t think about it for a second. In the Arsenale we will present the Ferretti 1000, the largest motoryacht ever produced under this brand. I emphasize that it belongs to a French owner, happy to be in the Lagoon ”.

The CEO of the Bénéteau group, manufacturer of both sailboats and motor boats, Gianguido Girotti also shares the same idea, adding: “I have a great passion for the city of Venice, which I consider the ideal hub to create an international nautical event that have visibility on the eastern Mediterranean, now totally uncovered. One cannot fail to take advantage of the possibility that Venice offers to practice a synergy between culture and the sea. I see that interest in this show has grown a lot between the first and second edition and I consider it the beginning of something very important. There is also a lot of space for services related to boating, technology and tourism ”.

In the field of motor boats, the flagship will be the Ferretti 1000, the largest in the Ferretti Yachts range, the traditional motor yachts that started the fortune of the Ferretti group. Thirty meters of high quality for the shipyard which has its headquarters in Romagna in Forlì. Thirty meters also for the DP 100 exhibited by Dalla Pietà. The Azimut Benetti Group exhibits Magellano 26, the latest addition to the series.

In a week, the second edition of the Venice Boat Show

In the field of sailing, the flagship is Mylius 76, a shipyard based in the province of Piacenza that is dedicated to the construction of performance cruisers, often winning in regattas, recently the protagonist of a corporate reorganization that will lead to a renewal of the range.

A special section is dedicated to boats with electric propulsion, which will also be the protagonists of a race, the E-Regatta. Also protagonists will be the Candela foiling motorboat, a very interesting solution for Venice due to the reduced production of wave motion and Anvera E-Lab, an electrically-propelled offshore that will try to break the speed record with an electric motor. Goal exceed 100 km / h. Two sporting events will animate the event: the arrival of the famous Pavia-Venice powerboat test, which returns after several years of absence with the participation of over one hundred boats and with strict safety procedures and the Italian Match Race Championship,

The maximum sailing event will be the protagonist of a talk show (Saturday afternoon at 18.00 in the Scali Area) not to be missed: the title is “Luna Rossa and the Moor of Venice, the great Italian adventures in the America’s Cup” with speeches by Max Sirena , Gilberto Nobili, who led the Luna Rossa Prada Pirelli team in the last edition, and Tommaso Chieffi who participated in several Cup campaigns and was a tactician for the Moro di Venezia. For the first time in Italy, the public will be able to see the Prada Cup won in Auckland by the team wanted by Patrizio Bertelli.

The important conference “Oceani sunt servandi” will also start on Saturday, organized by the Italian Navy, with the subject of protecting the sea and its resources – The sea between environmental protection, economic interests and strategic considerations. Sunday morning the title of the cultural moment is “Waterfront and nautical development”, Monday morning “Yacht design and sustainability” by the scientific director of the Salone Carlo Nuvolari. Following a rich program, which also includes interventions by Assonautica, CNR Ismar, IUAV, Compagnia della Vela and others.

Ondeck Events is in feverish preparations for the organization of the Olympic Yacht Show 2021, an event for the premium yacht category.The...
Read more
Nautic Shows

RX France to continue to manage the Cannes Yachting Festival

With less than three months to go before its opening, the future edition of the Yachting Festival looks very promising. Not only...
Read more
Nautic Shows

The Balearic Yacht Show starts this Thursday 3rd June 2021 online and there are even more features for those who have registered....
Read more
Nautic Shows

Paris, May 27, 2021 - The Paris Court of Appeal today notified that it has postponed its decision for the second time...
Read more
Nautic Shows

The Yachting Festival 2021 from 7 to 12 September in Cannes

The continuous improvement of the health situation in France and in Europe following vaccination campaigns and the loosening of health measures announced...
Read more
- Advertisment -