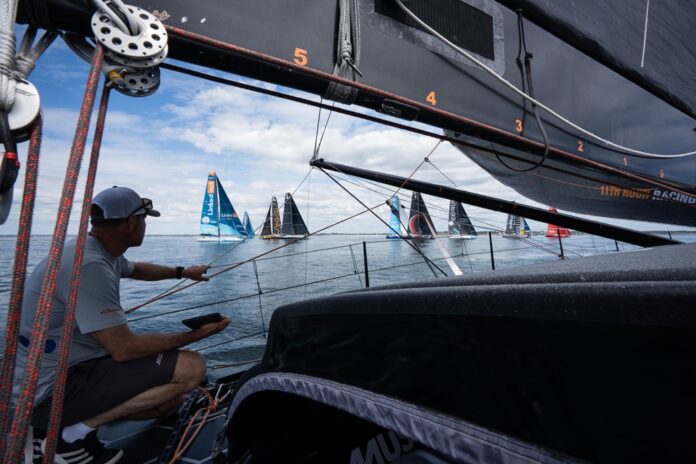 On the eve of the inaugural edition of The Ocean Race Europe, the 12 racing crews from all over the world are working on the final preparations in the French town of Lorient, before the start of the first stage towards Cascais, Portugal, scheduled for tomorrow. .

Divided into two classes of high-performance ocean-going boats, the one-design VO65, and the IMOCA 60 foiling, The Ocean Race Europe fleet will face off on a course that will take it first to -Cascais, then to Alicante, to finish in style. in Genoa, in mid-June.

Each offshore stage will assign the same amount of points, while the coastal regattas that will be held in Cascais and Genoa will give bonus points to the top three, very valuable in the event of a tie.

The powerful VO65 and IMOCA 60 foiling units are capable of covering distances in excess of 600 miles (1,111 kilometers) within 24 hours, under the right conditions. During The Ocean Race Europe the crews will likely have to adapt to varying conditions, first in the stretch of the Atlantic coast and then when they enter the Mediterranean waters.

Ocean sailing is a very demanding sport, and in addition to sailing skills, athletes must also always be mentally focused and physically ready to be able to conquer a place on the podium in Genoa. Sailing 24 hours a day, crews typically organize 4-hour watch shifts to always be in top form and to get the most out of the boat, day and night.

The Ocean Race Europe crew roster is full of names at the top of the professional sailing scene, including many veterans around the world, the world-famous The Ocean Race, which first raced in 1973 and has quickly become one of the pillars of ocean sailing.

Dutch veteran Bouwe Bekking, skipper of VO65 Sailing Poland VO65 said he was impressed by the large fleet for this first edition of the European event.

“I think it’s very nice to be here with seven 65’s.” Bekking said. “Especially for the newer teams, this new event is a fantastic opportunity to gain experience and to give sailors a chance to sail, but also to show sponsors what and how many opportunities there are.”

Having recently taken part in a prologue which was attended by Sailing Poland, Ambersail-2, Childhood 1 and The Austrian Ocean Race Project, it is that it has seen a very close fight, Bekking knows that The Ocean Race Europe will be very close “I think it will be competitive. Some teams will have an advantage because they have sailed more, and then there are teams on the rise. But I think from what we saw in the prologue that those crews learn very quickly. We aim to get on the podium in Genoa. “

Similarly, AkzoNobel Ocean Racing’s Australian skipper Chris Nicholson says the Dutch-flagged boat has reiterated that he wants to achieve a podium finish in this The Ocean Race Europe, despite his crew only sailing together for a few days. “We want to be with the leaders.” Nicholson said, who personally chose AkzoNobel’s crew members. “If we manage to stay in the top three in all the stages, then we will have the chance for a good overall result. For us it will be a matter of quickly entering Sitonia. We’ve only done three days of training together so far. We are improving quickly, but we have some road to catch up with the teams that have been sailing together for weeks, if not months. It’s a great challenge, and I know we have the right people to face it. “

For Viva México’s Mexican skipper Erik Brockmann, the team’s arrival in Lorient for the start of the first leg of The Ocean Race Europe is a moment to savor, as it marks his country’s return to The Ocean Race since Sayula’s victory II of compatriot Ramon Carlin in the first edition of the world tour in 1973-74.

Brockmann and his team transferred their VO65 by sea, traveling approximately 7,000 miles from Acapulco to participate in the European edition of The Ocean Race.

“I’m just happy to finally be here.” Brockmann said. “We worked hard with this group to get Mexico back to The Ocean Race. It took 50 years to return from the first edition. This time we will have three or four Mexican sailors during the various stages. Now we are ready to sail with the other six adversaries, because it is one thing to sail alone, even if you push the pedal, another to have adversaries. “

Despite training away from the rest of the VO65 fleet, Brockmann thinks the team aspires to an important result. “I think the race will be very close. It will be tight and I think we will see some close endings. We have covered many miles with light wind, many with strong wind and this first stage looks like it will be a combination of the two conditions, very light and very strong wind. Being able to adapt and position yourself best in relation to the wind and sail as fast as possible is the winning formula for these regattas. We are the ones who have covered the most miles, the boat is well prepared, so we have good hopes. “

For the IMOCA 60 class, which is primarily known for solo events such as the non-stop round the world, the Vendee Globe, The Ocean Race Europe is the first opportunity to measure the potential of the new full-crew rule.

The five boats in the class include four foil hulls, two built for the 2020-21 Vendee Globe (CORUM L’Épargne and LinkedOut), two from the 2016-17 edition (11th Hour Racing Team and Bureau Vallée), and one not -foiler (Offshore Team Germany).

According to 11th Hour Racing Team North American skipper Charlie Enright, having such a composite fleet adds a new dimension to racing.

“We have a truly diverse fleet. All boats are different, we have different generations and it will be interesting to see how it will go and how the boats will sail in relation to the others. I think there will be opportunities for everyone. We don’t know much about full crews in the IMOCA class. I think we will all learn as we go. It is quite early in the season and not many of these boats have done more than a couple of days of training after being put in the water. We will learn with experience, but we hope to find tough conditions to experience fully crewed boats. “

Weather forecasts say the fleet will encounter very different conditions on the route, starting with a light air departure and a near-calm exit from Lorient to the Bay of Biscay, before stronger winds set in and up to thirty knots become the norm. in the Capo Finisterre area and towards the Atlantic disengagement buoy.

Today, Friday, the crews of The Ocean Race Europe met for a warm-up on a shortened course around the Ile de Groix. In the same very light wind conditions, which are expected to be the same as on Saturday’s start, the first among the IMOCAs was LinkedOut while the Austrian Ocean Race Project took first place among the VO65s.

The start of the first leg of The Ocean Race Europe is scheduled for 13.45 and fans will be able to follow the live broadcast on Eurosport, on The Ocean Race website.