Baltic Yachts: Path in demand at the Monaco Yacht Show 2021 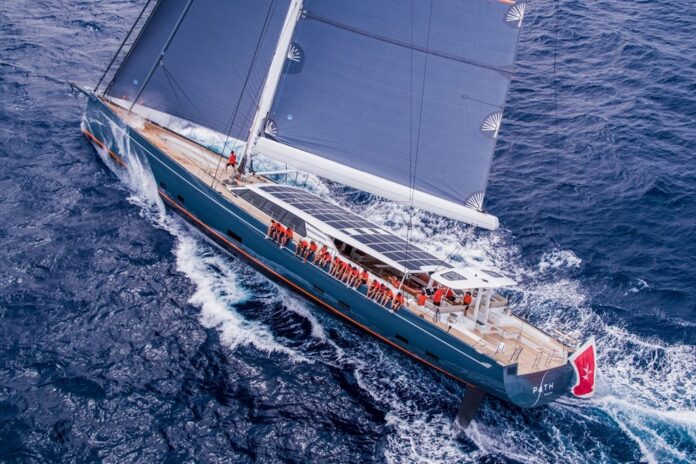 Following 6000 miles of shake down sailing culminating in successful trials in Palma de Mallorca, the Baltic 146 Path, launched earlier this year, went on to play a central role at the recent Monaco Yacht Show, where she received plaudits from guests and media alike.

Exhibited in the MYS’s successful new sailing yacht area, an initiative strongly supported by Baltic Yachts, Path was in constant demand for viewing appointments and attracted attention throughout a busy and well attended show.

“It was satisfying to see Path at the center of the new Monaco Yacht Show sailing area which succeeded in attracting a lot of attention to this sector of the superyacht industry,” said Henry Hawkins, Baltic Yachts’ executive vice president.

As Path prepares to sail further afield, eventually on global adventures with her owner, his family and friends, the yacht’s success in meeting the brief for a powerful, easily-managed, ocean-going sailing yacht, with exceptional living space above and below decks, is clear to see.

The right team
Commissioned by an experienced yachtsman with a specific vision of what he wanted in his new yacht, Path benefitted from a team selected by the owner for its expertise and experience in planning, designing and building a reliable, relatively uncomplicated superyacht.

“The owner’s achievement in getting the right team around him has been essential to the success of this project and has culminated in very productive trials involving all the key personnel. It’s a process which has benefitted the crew enormously and is a blueprint for how a project like this should be managed,” said Henry Hawkins.

Rolf Vrolijk, whose company judel/vrolijk is responsible for not only Path’s naval architecture, but also her styling and interior, explained how they met the challenges of designing a yacht which would be easy to handle, could maintain high average speeds and employ tried and tested technology rather than pioneering new innovation.

Reliability essential
“Reliability for independent cruising is essential and, importantly, Path had to reflect the owner’s wishes for a yacht which will be a comfortable home, a go-anywhere office and an easy to maintain, high performance family sailing yacht,” said Rolf Vrolijk.

“The owner was very clear in guiding us in the right direction – after our initial meeting we were invited to dinner at his home and then aboard his previous yacht so that we could accurately translate his thoughts into what he wanted Path to be, including styling and décor,” said Rolf.

Margo Vrolijk, judel/vrolijk’s interior designer and chief marketing officer, was in overall control of design and instrumental in working with the owner to develop an interior style to reflect a feeling of homeliness and comfort suiting a family cruising yacht. The owner’s representative Tatiana Kurbatova, who worked closely with Baltic Yachts, said: “The owner was delighted to be able to work with Margo who has clearly succeeded in turning his dreams into reality!”

Astonishing volume
The third largest yacht by volume built by Baltic Yachts in the company’s 48-year history, Path has an impressive amount of internal space, extensive accommodation for 18 guests and crew and a large combined deck saloon and covered cockpit. “There were 24 of us aboard for the recent sailing trials and we barely filled the covered cockpit area when we assembled for a briefing,” said Henry Hawkins. “The yacht’s volume is quite astonishing and even surprised the owner,” he added.

The deck saloon/covered cockpit and the twin steering positions, with their own protective biminis, were the subject of intense design studies to achieve the right ergonomics and safety features. Rolf Vrolijk explained that with the yacht heeled at 20° it was vital get features like hand holds and foot rests right so that crew and guests could move around the yacht safely while sailing.

Full-size mock-ups
Perfecting this involved building full-size mock-ups at Baltic Yachts and then inclining them to replicate life at 20°. The result may not be obvious while Path is at rest, but when sailing, these design details come into their own on deck and throughout the accommodation.

The cockpit hardtop bimini also provides the location for a 60m² array of solar panels capable of generating up to 8kW to boost the yacht’s lithium-ion battery bank and reduce fossil-fuel derived emissions.

Cleaner emissions
Path is the first yacht from Baltic Yachts to be fitted with main propulsion and generating machinery with new IMO (International Maritime Organisation) Tier III engine emission status. Her main engine is a conventional eight-cylinder Scania unit driving a forward-facing propeller set on a leg which rotates through 340° for added manoeuvrability.

Path carries two tenders, one an 8hp Torqeedo electric outboard-powered RIB, stowed in the large stern garage, the other a 6.5m twin-engined RibEye stowed in a foredeck recess which converts to a swimming pool while the yacht is at rest. The yacht is also equipped with two ultra-lightweight Reverso Match sailing dinghies, the hulls of which can disassemble into four parts for easy stowage.

Up forward, Path is fitted with a lightweight titanium swing anchor arm and a submarine anchor system providing ground tackle back-up and versatility for anchoring in any situation. She is also fitted with a powerful hydraulic bow thruster.

Homage to IMOCA 60
Despite her size, Path is a genuinely easy yacht to sail. Her three fixed headstays pay some homage to the IMOCA 60 developmental monohulls, whose multi-headsail configurations make singlehanded sailing possible.

Headsail deployment is easy, unfurling either the working jib on the forward stay, the jib staysail on the mid-stay or a storm staysail on the inner stay. Rolf Vrolijk said that a combination of two headsails would often be very effective and that the storm staysail would normally be set with three reefs in the main or a trysail.

“The first reef in the main represents a 25% reduction in sail area and the second reef a 50% reduction,” explained Rolf who said that in flat water and 35-knot gusts of true wind off Palma recently, the yacht was happy with the inner jib set and a full main, although a reef would have reduced heel without any loss of speed.

Average speeds up to 16 knots
Path is designed to maintain average speeds under sail of between 11 knots and 16 knots, depending on sea state, wind strength and direction. According to her captain Daniele Cesaro, she has already clocked speeds in the high twenties while on passage from Finland earlier this year.

Path’s bowsprit is detachable and while it may be removed for cruising it provides tack points for Code and asymmetric sails for more competitive outings.

The yacht’s hydraulically lifting keel draws 5.9m in the fully down position but just 3.4m when it’s up. To take full advantage of the shallow draft mode, Path is fitted with twin rudders which not only draw less than a single rudder, but also provide considerably more steering control especially in moderate or heavy beam sea reaching conditions.

There are additional two guest cabins forward with an option to convert a tv snug area to a small children’s cabin with bunks. Aft of the saloon there is one further guest suite and accommodation for eight crew. For Margo Vrolijk, who developed the décor and design style throughout the yacht, it was important to create an impression of the owner’s home by using teak furniture and woodwork together with fabrics and light painted panels and deckheads.

“The concept is inspired by the how the family lives ashore and translating that into an easily controlled sailing yacht,” said Margo. “The timeless style of the interior has been achieved through symmetry in geometry and balancing the choice of neutral and natural colour palettes with classic, colourful patterns like stripes and paisley shapes,” she said.

“We deeply researched each fabric and finish so that we could be sure they were easy to maintain by the crew – a very important part of the design brief was to be aware of the crew responsibilities and make their working environment as comfortable as possible,” added Margo.

Again, the use of accommodation mock-ups constructed at Baltic Yachts helped the design team translate the owner’s thoughts into what will become his spectacular floating home.

Path is a yacht designed for global sailing with reliability and ease of use the common denominators featuring in the tried and tested systems above and below deck. Her speed, comfort and attention to detail will ensure her owner and crew will be able to enjoy their superyachting experiences to the full.

The Swan 120 brings together the skill and craftsmanship of three distinct groups, all renowned in their individual fields, and working together,...
Read more
Sailing Yachts

Mylius taps the hippest names amongst project and interior designers from the international yacht industry to work together on true made-to-measure boats.Shaun...
Read more
- Advertisment -