Jules Verne Trophy: a Thursday start for the maxi-trimaran Sails of Change 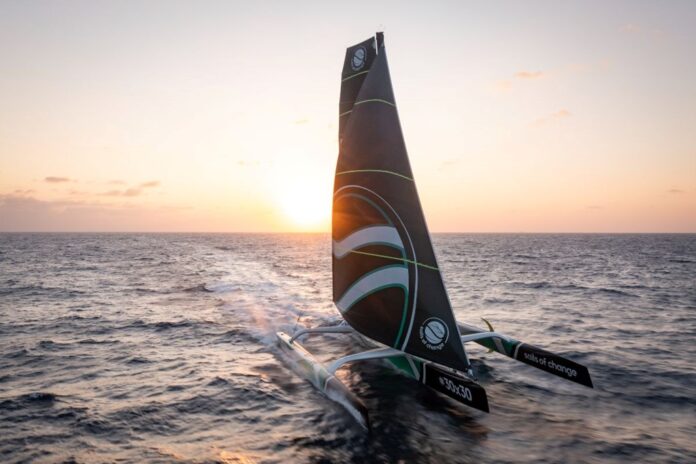 Early this morning, the maxi-trimaran Sails of Change will leave her port of registry of La Trinité-Sur-Mer (Morbihan). On board, the 11 sailors on the largest offshore racing trimaran in the world will set a course for the island of Ushant offshore of Finistère. Later in the day, they’ll cross the Jules Verne Trophy start line located between Créac’h lighthouse and the Lizard Point lighthouse, with the objectives of breaking the round the world record under sail, which stands at 40 days, 23 hours, 30 minutes and 30 seconds, as well as flying the flag for Sails of Change and the ’30×30′ campaign, which aims to protect 30% of the planet by 2030.

For this fourth record attempt, the crew led by skipper Yann Guichard has pulled out all the stops in a bid to optimise the trimaran. The boat’s hull has notably been shortened by three metres to enhance the balance at the helm and limit vibration. On top of this, the cockpit has also been redesigned throughout to make it more comfortable for the sailors and less exposed to the sea spray. The maxi-trimaran’s sail plan has also been redesigned, the aerodynamics improved and the boat has undergone a weight-reduction programme.

At sea, Dona Bertarelli and Yann Guichard will be surrounded by a crew which boasts a combination of seasoned offshore racing sailors and high-energy youngsters.

On previous occasions, the team has posted the 3rd best time in the Jules Verne Trophy (in 2015 – 2016 in 47 days 10 hours and 59 minutes), earning Dona Bertarelli the title of fastest women around the world in 2015, together with the record for the Ushant – Equator section (in 2019 in 4 days 20 hours and 7 minutes). The whole team will be setting sail with these reference times uppermost in their thoughts, eager to take on one of the greatest challenges in offshore racing.

A favourable weather window
A very quick descent towards the equator and the Cape of Good Hope are essential conditions for the success of the record attempt. For the first time since the start of standby on 1 November, a weather window is offering up a great opportunity to drop southwards, as Benjamin Schwartz, navigator on the maxi-trimaran Sails of Change explains: “Currently, a very powerful Azores High is in the process of dropping back down towards the islands of the same name, whilst a low pressure system to the west of Cape Verde is filling. The uniting of these two phenomena means that the trade wind is set to build from Thursday, which will enable us to drop down towards the equator very quickly

. At the same time, a low pressure system over the north of England will drop down towards Brittany on Friday, bringing with it big seas and lots of breeze. As a result, the aim is to avoid all that by setting sail early evening on Thursday. According to the routing, this weather situation should enable us to make the equator inside the record time we set in 2019, namely a little less than 5 days, which is perfect for the start of an attempt!

After that, there is still some uncertainty about the doldrums, which may hinder our progress for longer than planned. Finally, in the South Atlantic, we’re monitoring a low pressure system level with Brazil, which we may be able to position ourselves ahead of to make for the Cape of Good Hope inside the time set by Francis Joyon in 2017. Today, the weather at Good Hope is very good, but that may still change as the position of the Saint Helena High and the way the low pressure system will roll through are yet to be tied down as that’s still a long way off  (D+10)”.
Therefore, the way the weather systems link together in the South Atlantic will be key in our bid to hunt down the record and slip along into the Indian Ocean as quickly as possible.

Sails of Change, a round the world for the ’30×30′ campaign
In 2021, the maxi-trimaran boasts a livery in the colours of ‘Sails of Change’. Sails of Change is creating a community of sports and nature enthusiasts eager for a sustainable future for our planet. Founders Yann Guichard, Dona Bertarelli and her children are committed to sharing ideas and information, creating partnerships to protect and restore the environment and work to bring about significant changes for a sustainable future for all.

The first campaign supported by Sails of Change, ’30×30′ is a global call to action to protect at least 30% of the ocean and the earth by 2030. The maxi-trimaran will deliver this message around the world, with #30×30 logos emblazoned on her sails and hulls, together with distinctive blue and green colour-coding for the new livery on the racing stable’s flagship.

“Through the medium of a sport that we love, I invite everyone to climb aboard with us in this human adventure and discover the beauty of nature and join us in our circumnavigation of the globe,” says Dona Bertarelli, on-board reporter for this latest attempt.

Within the context of this fourth attempt, the whole crew is keen to show what is within the realms of possibility during this challenge targeting self-sufficiency in energy. For the first time, the whole journey will be undertaken with no auxiliary engine.

“We’re going to take on an additional challenge, since we’ll be attempting to break the round the world record without using any energy produced using fossil fuels. Our main sources of energy will come from the sun and wind, as well as an on-board bike-powered generator. We are keen to show it’s possible,” explains skipper Yann Guichard.

With five months to go, almost 30 entries ranging from Maxis to Melges 24 have committed to a fabulous week of racing...
Read more
Regatta

Yesterday, at the Circolo del Remo e della Vela Italia, the Tre Golfi Sailing Week was presented to the authorities and the...
Read more
Regatta

The champagne has yet to dry on the 2021 World Championship trophy in Miami as the class is finalizing the 2022 schedule...
Read more
Regatta

Following the success of the 2021 Rolex Fastnet Race from Cowes to Cherbourg-en-Cotentin, the Royal Ocean Racing Club (RORC) and its French...
Read more
Regatta

The International Maxi Association is to introduce a new European Championship for maxi yachts in 2022. Taking place over 14-20th May out...
Read more
Regatta

The 53rd Semaine Olympique Française de Hyères (SOF) will take place between April 23 to 30 2022. For the first time in...
Read more
- Advertisment -