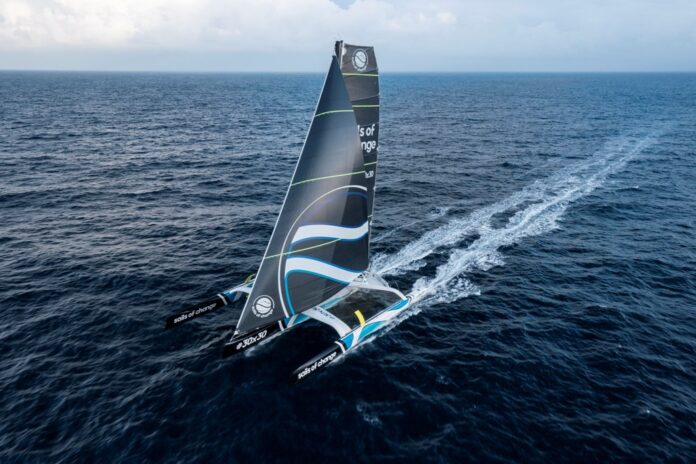 Dona Bertarelli and Yann Guichard are ready to challenge once again at the Jules Verne Trophy, held since 2017 by Francis Joyon and his crew with a time of 40 days 23h 30 ’30’ ‘.

The maxi-trimaran Sails of Change (ex-Spindrift 2), modified last winter to improve performance, will have a crew of 11 on board. This will be Yann Guichard’s fourth attempt as skipper, during which the team will face two challenges: winning the Jules Verne Trophy and producing all the energy needs on board in a self-sufficient way. For the first time, in fact, the entire route will be carried out without an auxiliary engine.

“We will face another challenge, as we will try to break the world record without using any energy produced with fossil fuels. Our main energy sources will come from the sun and wind, as well as from a generator. powered by a bicycle on board. We want to show that this is possible. “

This new energy challenge joins a series of technical solutions introduced during the winter that concern the cockpit, aerodynamics and the central hull which has been shortened by three meters. This latest modification improves balance at the helm and reduces vibrations aboard the largest racing multihull ever built (37 meters), which has been renamed specifically for this challenge: Sails of Change.

The Sails of Change project

The first campaign supported by Sails of Change, “30×30”, is a global call to action to protect at least 30% of the oceans and the earth by 2030. The maxi-trimaran will carry this message around the world, with the # 30×30 logos reproduced on its sails and hulls, together with blue and green, the new colors of the team’s flagship livery.

Dona Bertarelli, communications manager and embarked during this attempt to tour the world, explains the project as follows: “Through the sport we love, we invite everyone to follow us in this adventure, discover the beauty of nature and join us in our circumnavigation of the globe. “.

The maxi sails of Sails of Change will be standard bearers of the educational program Spindrift for Schools, whose educational kit “Inspired by Nature: committed to action!” it has just been published in collaboration with the Departmental National Education Service of the Morbihan region, the French Réseau Canopé of Lorient, Brittany, and with the support of UNESCO.

In this regard, Dona Bertarelli said: “Our goal is to inspire, raise awareness and prepare young people to become the adults of tomorrow. We hope to be able to share, through our passion and our commitment to nature, our knowledge and our values ​​to pass them on to future generations, while they learn to work together and commit to their future “.

On stand by from 1st November

The maxi-trimaran Sails of Change will depart from La Trinité-sur-Mer, in southwestern Brittany, to reach the starting line off Ushant as soon as there is a favorable weather window: Standby will start 1 November 2021 .

The crew selected by skipper Yann Guichard for this world tour will consist of ten sailors with complementary backgrounds, five of whom have already circumnavigated the globe. Two of them, Thierry Chabagny and Xavier Revil, won the Jules Verne Trophy in 2012, while Dona Bertarelli has held the women’s round-the-world speed title since 2016. In all, nine of the eleven sailors have previously been involved in an attempt to conquer the Jules Verne Trophy. Only Julien Villion and Yann Jauvin will make their Trophy debut in this legendary international offshore record event.

The Sails of Change Crew

The Jules Verne Trophy is the world record for crewed sailing around the world, without assistance and without stopover. In less than 30 years, the benchmark time was halved from 79 days 06h 16 ‘in 1993 to 40 days 23h 30’ in 2017. Spindrift took part in three previous attempts to break the record, setting the third best time in history in 2016 and securing the mileage record between Ushant and the equator in 2019. From November 1st, the team will again be looking forward to a fourth attempt, with the flag of Sails of Change.