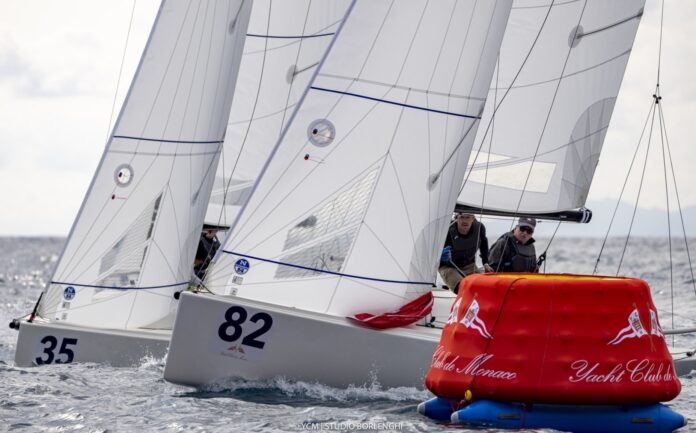 The temperature fell as the tension mounted on the last day of the Primo Cup-Trophée Credit Suisse, a flagship winter event organised by Yacht Club de Monaco, with technical clothing from Slam for all winners, launched 1985 at the instigation of YCM President, HSH Prince Albert II.

For the 38th edition 14 nations, 400 sailors and four classes (J/70, Smeralda 888, RS 21 & Longtze Premier) were competing. Some big names in sailing had made the trip including John Kostecki, winner of the Volvo Ocean Race and America’s Cup on USA 17, Michael Illbruck and 470 Olympic medallist Will Ryan.

For the J/70s there were two prizes to aim for as the Primo Cup doubles as the fourth and final act of the Monaco Sportsboat Winter Series of monthly regattas, which this season was a qualifier for Monaco teams hoping to compete in the upcoming World Championship here in Monaco (14-22 October 2022).

From start to finish it was a battle of wills, with the Swiss on the J/70 Découverte-Geo Mod keeping a cool head. The quartet kept up the pressure, peerless in their reading of the course in a light 5-10 westerly on the last race of the day. Even the combative Americans on Good to Go could not alter the inevitable, finishing 2nd ahead of another Swiss team on CER Aprotec-Ville de Genève. Among the J/70 Monegasque favourites, Giangiacomo Serena di Lapigio (G-Spot) kept pace with the leaders to finish an in style in 4th while another YCM member, Ludovico Fassitelli (Junda) came in 6th.
The weekend also marked the end of the 2021/2022 Monaco Sportsboat Winter Series season won by Ludovico Fassitelli (Junda) ahead of Loïc Pompée (Sailing Racing Team) and Giangiacomo Serena di Lapigio (G-Spot). “I’m delighted by this victory,” said the Junda helmsman, “it’s been a great season and we can’t wait for the Worlds”.

In the Corinthian category, the Irish Wildcard hit the jackpot for the season, with Cesare Gabasio’s TinnJ/70 and Stefano Roberti’s Piccinina both from Monaco completing this podium.

Newcomers to the Primo Cup-Trophée Credit Suisse winter classic, the RS 21 class launched in 2018 delighted those who saw them in action. Very popular in Italy, the class attracts many outstanding sailors like Branko Brcin on Gioia that finished 2nd.

At the front of the pack, it was all about the dominance of Beyond Freedom, no need to mortgage the dreams of the men on this Italian RS 21 led by

Gianluca Grisoli who won three of the five races.

Ditto for Smeralda 888 where Black Star won hands down, finishing in the top three in all races. The podium for this class of “Gentlemen Racers” was completed by Botta Dritta then Beda.

It was a much tighter finale in the Longtze Premier where Wetfleet won by a whisker although equal on points with Shensu in a fascinating contest here in Monaco.

The story continues as a date has been set in the Principality (2-5 March 2023) for the 39th Primo Cup-Trophée Credit Suisse. Before then, the J/70s have an appointment for the World Championship when at least 90 teams are expected. Note too how YCM organised numerous training clinics, supervised by high-level technique gurus to help the Monegasque fleet prepare for the challenges ahead.