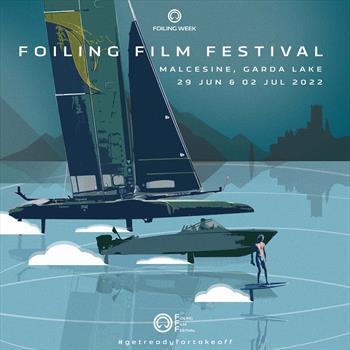 The constant human research towards new technologies and the confrontation of man with nature have given rise, over the years, to unique enterprises, which have now become real stories.

Athletes, companies, associations, people, that have inspired and inspire generations, leading other people to push themselves further and further, continuing to push the boundaries in the search for a unique and deep relationship between themselves and Sea.

After the huge success and popularity of all the foiling sports in the last years, this year Foiling Week launches the first Film Festival all about Foiling: a competitive event bringing together the spirit of adventure, action, environment and new technology from around the world.

At its first edition 2022, the festival will take place in the stunning Malcesine overviewing the magic wind machine called Garda Lake during Foiling Week from June 29th to July 3rd.

The festival will also offer the chance to meet other filmmakers, photographers and professional athletes and mentor around the world of sailing and foiling at 360 degrees. It would be the opportunity to exchange ideas and collaborate in a highly creative and inspiring atmosphere in person during the Foiling Week event. It’s also a great opportunity to connect with leaders in the foiling adventure field, including engineers, brands, gear manufacturers, potential sponsors, and journalists.

All films can be subscribed starting from March 15th until April 30th (late deadline May 20th) on the Film Freeway online Platform here or through email at info@foilingfilmfestival.org

Films entered into competition will be reviewed and selected prior the Festival.
All winner films will be included and screened into the FFF nights in Malcesine (approximately two hours long and contain 8-15 mixed films). Short films are particularly popular for the programming flexibility they provide so longer film submitted, might also be asked to enter a shorter version in competition.

Other films, even though won’t be screened during the festival, may be considered for inclusion in our World Tour programs (in theatre or virtual) that will reach a global audience of sailors and foiling lovers from around the globe.

Find out more at www.foilingweek.com