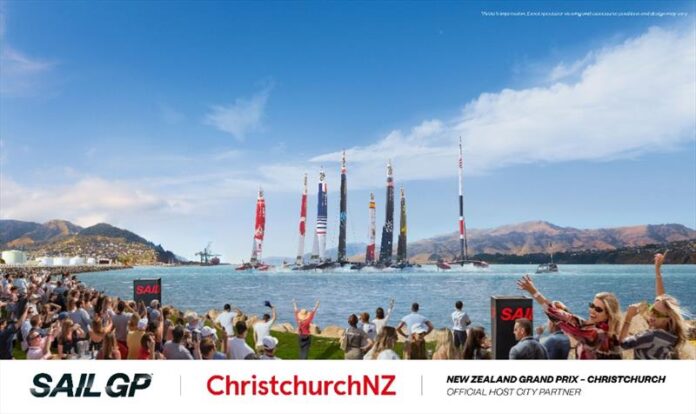 The spectacular setting of Lyttelton Harbour will play host to the adrenaline-filled racing, marking Christchurch as one of at least nine iconic global destinations to celebrate the international event in the expanded calendar for Season 3.

The 2023 New Zealand Sail Grand Prix is the first event in a four year commitment with support from the Government through the Major Events Fund, Christchurch NZ and Auckland Unlimited. Through the partnership – spanning Season 3 to Season 6 – Christchurch and Auckland will share hosting duties of SailGP, claiming a permanent fixture on the SailGP season calendar and the first home event for Peter Burling and Blair Tuke’s New Zealand SailGP Team.

New Zealand SailGP Team co-CEO Blair Tuke said: “Entering Season 3 of SailGP and our second year in the league knowing we’ll be racing on home waters in March adds an extra element of excitement and determination. New Zealanders have always been keen sailors and supporters, and we can’t wait to have that Kiwi energy and hype right there on the water’s edge.”

The race course for the New Zealand Sail Grand Prix has also been confirmed, with fans getting closer to the action in New Zealand than they ever have before.

Ten identical wingsailed, foiling catamarans are expected to reach speeds of of over 50kts as they fly within metres of the shoreline by Naval Point, coming into the finish in front of thousands of fans.

SailGP Commercial Director and Head of Event Karl Budge said: “It’s fantastic to be working with ChristchurchNZ to bring this vision to life. Together we’re committed to re-imagining how Kiwis are entertained by sailing over the next four years. With what we have planned, I am sure this will become the summer event in New Zealand.

“Heading into its third season, SailGP is going from strength to strength commercially and is recognised as the fastest growing sports league in the world – it is action-packed, boat-to-boat racing just metres off the shoreline edge. With 10 boats on a very tight course, it really is dramatic, as we have seen with other events this season with capsizes, crashes and daring passing maneuvers.

“SailGP is expected to generate many positive benefits for the New Zealand economy and environment. The experience will help stimulate and promote regional tourism, showcasing Christchurch in a unique way to a global audience and supporting a number of positive environmental projects.”

After the inaugural event scheduled for January 2022 in Christchurch was forced to be cancelled, ChristchurchNZ is excited to host the world-class event in Season 3.

Ali Adams, chief executive of ChristchurchNZ, said: “We couldn’t be more thrilled to have committed to hosting the first New Zealand Sail Grand Prix in Christchurch in 2023, along with Season 5. The Season 3 and Season 5 events are forecast to provide significantly increased benefits for Christchurch compared to the cancelled 2022 event, with more teams participating, a greater global broadcast audience as the popularity of SailGPhas grown, and more visitors due to the lessening of COVID-19 travel restrictions.

“Hosting SailGP will have positive legacy impacts for Christchurch and Lyttelton by boostingthe reputation of the harbour as a sailing destination, and the city as a place capable of hosting large-scale international events. These legacy impacts will be boosted by the multi-year commitment SailGP has made to New Zealand through to 2026. We are also excited about the greater and longer-term future opportunities the event will have for the various communities around Lyttelton Harbour.”

Tickets to the New Zealand Sail Grand Prix will go on sale later this year. To sign up and be the first to access tickets click here www.sailgp.com/newzealand

*Further events will be announced to complete SailGP Season 3.