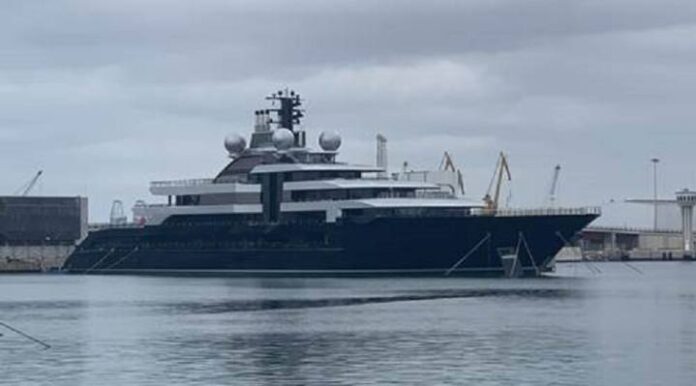 The Ministry of Transport has reported this afternoon of a third yacht, presumably Russian property, held in a Spanish port due to the conflict in Ukraine. This is the Crescent , a giant with a black hull 135 meters long and 24 meters wide, which has been temporarily immobilized by the Merchant Navy in the port of Tarragona. The Security Forces attribute its property to the Russian oligarch Igor Ivanovich Sechin , according to El País . He is the chief executive of the Rosneft oil company and an intimate of Vladimir Putin.

His presence in Tarragona has been causing a stir for months: a sister ship, the Scheherazade , is being investigated in Italy, specifically in Marina di Carrara, as the alleged property of  Putin himself or of personnel close to the Russian head of state. The value of this type of ship, which includes two heliports and its own hangar, is between 600 and 700 million dollars.

The Crescent megayacht had requested departure from the Maritime Captaincy on the 4th, but did not set sail . The Government will now analyze whether it is owned by a company or a billionaire included in the package of sanctioning measures set by the European Union in the face of the Russian invasion of Ukraine.

Crescent is two years old and sails under the Cayman Islands flag . Considered one of the most luxurious yachts in the world, she had been in the Catalan port since November 2. The ship now joins the Valerie, belonging to the oligarch Sergey Chemezov (Rosnet), docked in Barcelona, ​​and the Lady Anastasia , which different sources attribute to Alexander Mijeev (Rosoboronexport), which is under investigation in Calviá (Mallorca) .

Once again, it will be the Maritime Captaincy, dependent on the General Directorate of the Merchant Marine, who will be in charge of guaranteeing the safety of the ship and its crew. And the investigations will be carried out by the State Tax Administration Agency, institutions dedicated to the prevention of money laundering and the financing of terrorism and State Security Forces and Bodies.

If it is verified that it belongs to a person or entity sanctioned by the European Council , it will be immobilized .

Facebook
Twitter
Pinterest
WhatsApp
Previous article
SailGP: 2023 New Zealand Sail Grand Prix dates and race course confirmed
Next article
The ‘Valerie’, the yacht that could not flee from the port of Barcelona