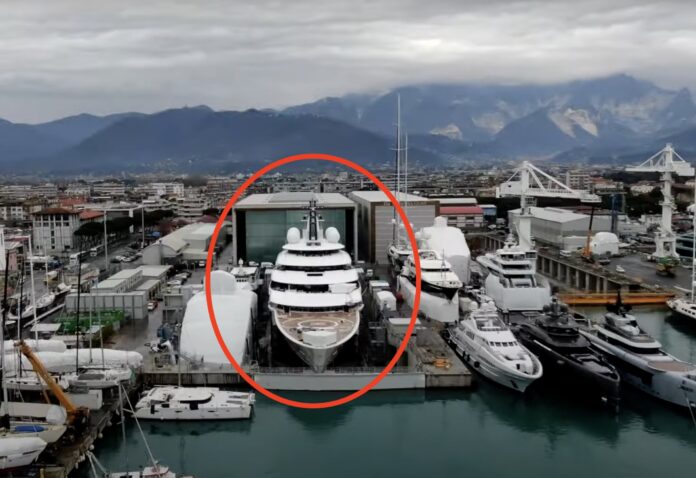 European and U.S. authorities have started seizing assets belonging to known Putin associates, Russian oligarchs believed to have amassed their fortune illegally and to have used it to fund the ongoing war effort against Ukraine. President Vladimir Putin himself is on international sanctions list, but a megayacht believed to be his is still out there, at total liberty.

A couple of weeks ago, reports noted that one of the largest megayachts in the world, which also happens to be the biggest and most expensive vessel to not have a publicly-known owner, was in Italy. Scheherazade is a 459-foot (140-meter) six-decker with two helipads and outrageous luxury amenities, delivered by Lurssen in 2020 for a reported total cost of $700 million.

Despite its size and its fame, no one knows who owns Scheherazade, but this isn’t the first time Putin’s name is thrown in the mix. The ship’s captain, who also happens to be the only non-Russian crew member, told the NY Times two weeks ago that, while the owner was Russian, he was not on any sanctions list. The same captain refused to go into specifics, citing his ironclad NDA (non-disclosure agreement).

A new journalistic investigation claims to prove that only Putin could be the owner, because more than 23 of the listed crew members are FSO – the Federal Protective Service, which is the Presidential security agency involved in managing and helping out with every aspect of Putin’s life, from his food intake to running his estates and providing personal security.

The investigation is spearheaded by journalist Maria Pevchikh and anti-corruption activist Georgy Alburov, both members of the Anti-Corruption Foundation (FBK) founded by Alexei Navalny. Navalny is Russia’s biggest Putin critic and opponent, having spent the last two decades striving to unmask the highest levels of corruption within the Russian government.

The full investigation is available in the video below, with English subtitles. The argument made is that, since this is a ship ran entirely by a Russian crew – and highly specialized state agents, at that – only Putin could be the mysterious owner. This is the same crew that handles every other aspect of business he has in the country and in the rest of the world, so the fact that they fly monthly to Italy for “maintenance” on Scheherazade could be proof that Putin is pulling the strings.

“They are Russian state employees, military personnel, and they regularly travel to Italy as a group to work on the mysterious yacht,” Maria Pevchikh says on Twitter. She and Alburov urge Italian authorities to immediately seize the yacht under current sanctions.

We should note that, while Navalny’s work to expose Russian oligarchs and politicians’ corruption is notable (particularly his January 2021 film on Putin’s supposed palace in Gelendzhik, Krasnodar Krai, aka “the world’s biggest bribe”), he remains Putin’s political opponent and has been trying to replace him at the head of state for a number of years. In other words, do take this with a pinch of salt.