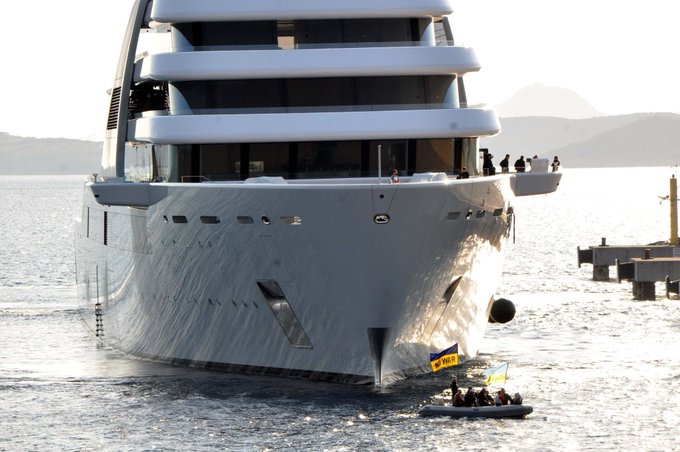 Right after Roman Abramovich’s name was included on international sanctions lists in Europe and the U.S., the Russian billionaire began moving his most prized assets out of reach. These included his two superyachts, which also happen to be among the world’s biggest, most expensive, and most technologically advanced, Eclipse and Solaris.

Solaris is a newer and smaller build, delivered last year by the Lloyd Werft shipyard in Bremerhaven, Germany. With an estimated price tag of $610 million, it is believed to be the most technologically advanced construction of its kind, including a state-of-the-art security system with bulletproof windows, armored protection, and a radar-controlled missile detection system.

When Roman Abramovich effectively became persona non grata in his adoptive country, the UK, when his name was put on the sanctions list, he made his way to Israel, Turkey, where he holds real estate and, as of the time of press, is still welcome. Turkey has not joined in on the sanctions against Russia for the invasion of Ukraine, so Abramovich also brought Solaris here on March 21.

According to the Kyiv Independent, the superyacht docked in the port of Bodrum, a resort in the Aegean Sea. The welcome committee included a group of yachtsmen from Odesa, a Black Sea city currently under heavy Russian fire, onboard a motorized boat, trying to prevent Solaris from docking. There’s a video of the encounter in the tweet available at the bottom of the page.

As you can see, the protesters carried the Ukrainian flag with the words “No War” written on it. It wouldn’t be too far-fetched to conclude that they were protesting against Russia’s invasion of their country, and specifically Abramovich’s indirect involvement in it. As one of Russia’s richest men, Abramovich is close to Putin, is said to have “privileged access” to him, and is believed to have financed the war effort, whether directly or indirectly.

As courageous as the protest was – it does take guts to position a small dinghy in front of a gigantic 460-foot (140-meter) eight-decker – it did not have any impact whatsoever on the final destination of Solaris. A police boat showed up and got the dinghy to move out of the way, and the superyacht was able to dock without further interruption.

No word yet on whether Abramovich was onboard the superyacht.