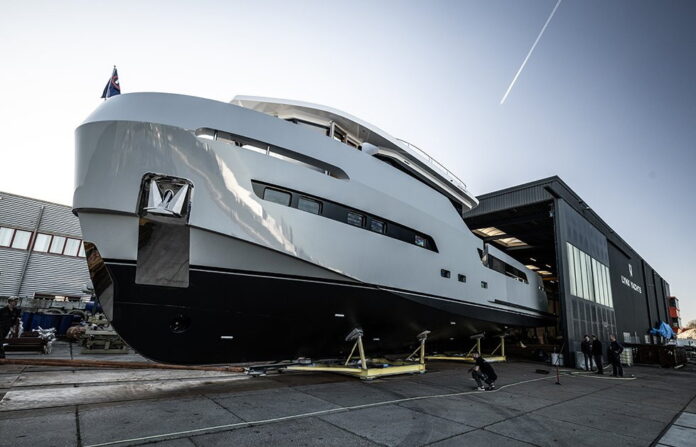 Dutch shipyard Lynx Yachts announced the official launch of its first 27.4-meter (90-ft) Crossover 27 superyacht. With a stylish look and a sporty profile, this luxury vessel is ideal for adventure-filled journeys at sea.

Named Avontuur (which means “adventure” in Dutch), the superyacht touched the water for the first time earlier this month. Now, it’s receiving its final touches before it heads to its owner later this Spring.

Its exterior was designed by Dutch studio Bernd Weel, while the interior was drawn by the French designer Franck Darnet. The Crossover 27 combines the elegance of a superyacht with the flexibility of a support vessel in a customizable expedition yacht.

The vessel initially had a four-stateroom configuration that included the master stateroom, a VIP, and two twin cabins with crew quarters located aft of the engine room. But the owner of Avontuur wanted a slightly different layout, with the crew quarters integrated into the guest area.

One of the core features of this superyacht is the spacious main deck, which includes a salon surrounded by large windows that let the natural light bathe the whole interior space. The rest of the deck can stow various water toys, such as an Air Nautique G23 and a five-meter (16.4-ft) RIB. Once these luxury toys are launched, the area can be turned into an open space for entertainment.

Above the main salon is the sundeck, which features a crane that is used for getting even more water toys onboard. Avontuur also has a large beach club that takes guests closer to the sea. And, of course, it had to include a lazarette too that will allow the owner to store surfboards, paddleboards, canoes, or scuba diving equipment.

Slim Bouricha, the founder of Lynx Yachts, commented at the launch: “We are delighted to launch Avontuur following a fantastic and fruitful collaboration with her Californian owner. He is a seasoned and sporty yachtsman who was involved at every single level of the build, and it has been a real pleasure working together.”

The yacht will head to its owner in April. Following its delivery, Avontuur is expected to cruise around the Mediterranean.