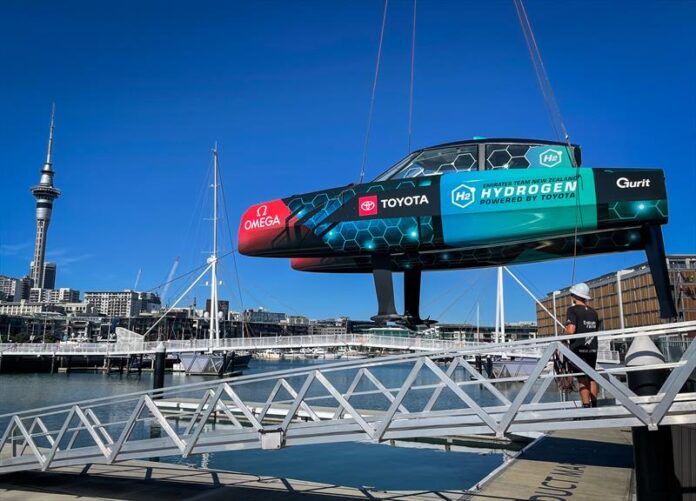 Chase Zero is the first boat to be launched in this America’s Cup cycle, and one that is hoped will set the foundations of a seismic shift towards a cleaner more sustainable future in powerboating around the world.

“I hope we can look back on this today as the start of a hydrogen motorboat revolution,” said Sir Stephen Tindall – ETNZ’s sustainability ambassador and supporter of the project, before the boat was craned into the water for the first time.

After the successful innovation of the AC75 foiling monohull and subsequent defence of the 36th America’s Cup, Emirates Team New Zealand CEO Grant Dalton said, “What next? How can we keep pushing the boundaries of innovation and technology utilizing the people and technology available at ETNZ?”

With the AC75 class already locked in for the next America’s Cup and with a continued drive towards a more sustainable future, the focus quickly shifted to the on-water chase boats. During the measurement of the carbon emissions of the teams last campaign to become carbonzero certified, it was obvious the chase boats were a sizable contributor to the overall emissions.

And so, the fixation on Hydrogen powered foiling chase boats was born. Initial consultation received suggested this was not the 12-month project the team was looking for.

“We were basically told something as audacious as Chase Zero would take 3.5- 4 years, but this has effectively taken us just over 9 months.” said project Manager Geoff Senior.

“We certainly weren’t expecting to be working so intently straight after AC36. But I guess that’s just part of our culture and how we work best at Emirates Team New Zealand so it’s pretty exciting to get to this stage, a huge milestone for the team.

It was a big effort to get the boat built at our build facility and then it’s been a massive effort from the fit-out team here at the base, just getting all these powertrain components in and all the respective bits of hardware.

I don’t think we realize how significant it is. I think there’s almost no other boats like this around. The next boats like this are still a long way away, so I think once it’s in the water and running, we will realize just how important it is on the world stage.”

Admittedly projects like this don’t just happen, Chase Zero, which will cruise at 35 knots with a top speed over 50 knots, is the culmination of the collective input of the team and several vital partners.

Richard Meacham who addressed the team and partners at the launch said, “It is not just the people of this team, but the partners and the relationships we have that allow us to do what we do. And when the crazy concept and plan was suggested to some of our partners here today, they didn’t step back. There was agreement that if something isn’t hard, then it isn’t worth doing. Toyota, Gurit Composites, Global Bus among others have all contributed massively to Chase Zero in their own ways.”

Toyota, an Emirates Team New Zealand partner for over 30 years played a significant part in facilitating the acquisition of the two all-important fuel cells.

Neeraj Lala, Toyota NZ CEO said, “We are supporting our long-term partners, Emirates Team New Zealand by supplying them the hydrogen fuel cell system as a way to investigate the different applications of this carbon neutral technology. We have secured from Toyota Motor Corp. two prototype units for the ETNZ trial that were still in their preproduction phase.

“We are excited to see the boat go in the water as a demonstration of the capabilities of Toyota’s hydrogen technology. Toyota is focused on helping advance hydrogen technology and its development in New Zealand through commercial partnerships, such as the ETNZ fuel cell chase boat, under our Toyota Hydrogen Projects banner.”

Chase Zero will now go through an extensive commissioning and testing phase in the dock over the next week or so, testing and running the prototype systems before being set free on the Waitemata harbour in the coming weeks.