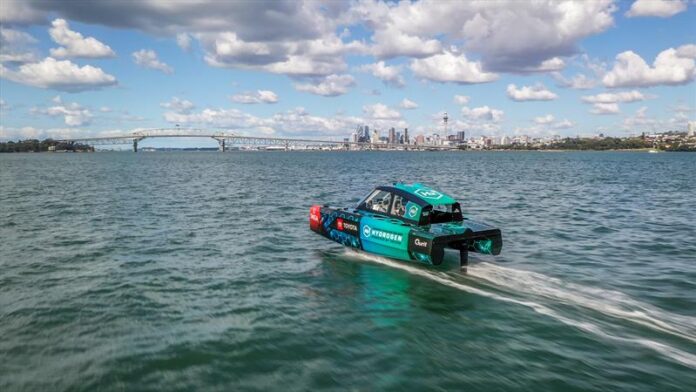 Just one week after Emirates Team New Zealand first christened their hydrogen-powered foiling catamaran ‘Chase Zero’, the 10m prototype was up and foiling around the Waitematā harbour in Auckland today.

Chase Zero has been progressing through a highly measured and stringent commissioning process with every element of the Hydrogen powered boat tested independently and collectively before bringing it up to foiling flight mode with the ETNZ developed autopilot in control of the ride height.

“This is just our second day on the harbour”, explained Project Manager Geoff Senior.
“And if I am honest, we are always pretty conservative with our commissioning timeframes, but everything has worked amazingly off the bat, maybe one or two small gremlins to work out of the system as always, but we didn’t expect it to all be up and foiling as quickly as we have got it today out here.”

It is the same harbour that in late August 2012 saw Emirates Team New Zealand first introduce foiling to the world of the America’s Cup in their AC72 catamaran yacht, which changed the face of sail racing globally.
And now, just under 10 years later the team is introducing hydrogen powered foiling chase boats to the America’s Cup also. The common theme is obviously foiling.

“Travelling at 50 knots on the water requires a lot of power, and so foiling, like in sailing, was an obvious choice for us to reduce drag and therefore help to extend our range to around 180km on one fill of hydrogen which is stored on 4 tanks onboard, two in each hull.” said Design Coordinator Dan Bernasconi.

The green hydrogen is stored in gas form at a maximum pressure of 350bar. The tanks are made from a plastic liner, wrapped in carbon fibre for the required strength. Each is capable of holding 8kg, giving a total capacity of 32kg when full.

Chase Zero is powered by two 80kW Toyota hydrogen fuel cells, 1 in each hull, which provide most of the energy needed to power the boat. The hydrogen gas is passed through a catalyst which strips the electrons away from the H2 molecules. These electrons are used to power the boat and then return to the positively charged H+ ions which are combined with oxygen from the air, leaving nothing but pure H2O to exit the exhaust of the fuel cell. This electricity is then either stored in the battery, or fed directly into the electric motors that provide the propulsion to the boat.

The batteries onboard also play a critical role in allowing Chase Zero to accelerate and achieve its top end speeds as Electrical Engineer Michael Rasmussen explains, “The fuel cells provide the majority of the energy, however the battery acts as a filter for the faster changes in power demand. The response time of the fuel cell is much slower than available from the battery, so during fast changes in demand the battery supplies the difference as a compromise in performance was not an option.”

“The battery is also used to achieve the higher speeds. The boat can cruise at approximately 30kts with the 160kW generated from the fuel cells, but to achieve the higher end speeds up towards 50 knots we are able to draw from the batteries as well to bump this up to around 420kW for shorter periods. The fuel cell will then re-charge the batteries once there is excess power available again.”

Looking on was Emirates Team New Zealand COO Kevin Shoebridge, “This really is a considerable step forward in clean renewable energy in the marine industry. Looking at Chase Zero foiling along today, it looks like a futuristic power boat, but then you actually need to remind yourself that there are zero carbon emissions, it is basically water vapour coming out of the exhaust which is amazing when considering the positive environmental impact that can be made by reducing emissions from regular boat engines.”

When acknowledging what the Chase Zero team have achieved in the past 9 months Emirates Team New Zealand CEO Grant Dalton said, “The team have really delivered under all sorts of Covid challenges and pressure to get this boat designed, built, commissioned and foiling in such a small timeframe. And when I say ‘the team’ that includes the essential partners we have bought together as well like Toyota, Global Bus Ventures, Gurit and several others.”

“This project is all about proving how we can influence the global marine industry by producing a prototype hydrogen powered foiling catamaran. And today has been a huge progression towards that. We have no doubt there will be a lot of entities and organisations that will be watching and thinking how the technology can be adapted to their specific use case or ideas.

The Chase Zero team will continue its commissioning process over the coming weeks to be ready for use when the team resume sailing operations later in the year.