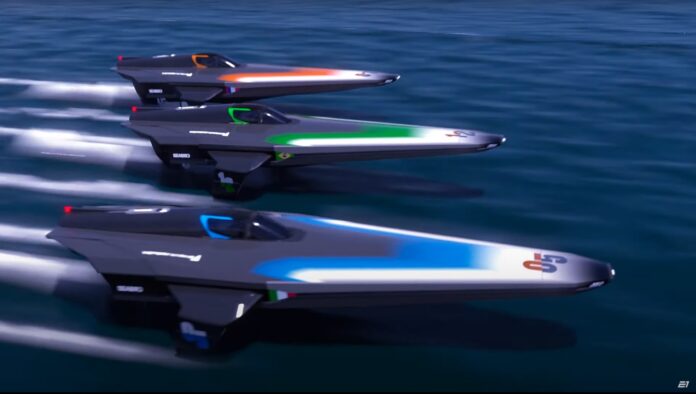 The first-ever electric powerboat racing event in the world is getting closer and its organizers are constantly revealing exciting info on the championship to keep us going until next year. The E1 Series announced the first racing team to take part in the inaugural season of the competition.

Venice Racing Team is the name of the recently unveiled Italian entity, which was created with the clear purpose of competing in the UIM E1 World Championship. It is the brainchild of entrepreneur Francesco Pannoli, energy specialist Claudio Iannelli, racing expert Luigi Radice, and motorsport expert Eugenio Razelli.

The team will represent the city of Venice, hoping that this call to action will help protect the lagoon environment and artistic heritage of the iconic “city of water” by encouraging a rapid switch to electric mobility in urban waters. As stated by Pannoli, who is the team principal of the Venice Racing Team, the E1 World Championship represents a revolution in the nautical world, giving racing the responsibility of being the driver of positive change. Taking part in this event is an honor for the team and marks an important moment for Venice, accelerating its transition to sustainable mobility in the water.

The E1 Series will have up to 12 teams competing on the water in several race locations worldwide. Dozens of other prospective teams have been approached so far, from sports such as traditional powerboating, sailing, and even from the automotive world, so organizers will follow with more updates on the lineup.

Pilots involved in the race will have to handle tight and technical circuits at high speeds of up to 50 knots (93 kph/58 mph), behind the wheel of the RaceBird powerboats.

The RaceBird was designed by SeaBird Technologies and Victory Marine and was unveiled in 2020 at the Monaco Yacht Show. Now, its developers have a full-size model of the watercraft, one that weighs 880 lb (400 kg). The electric boat uses hydrofoil technology to fly 1.6 ft (around 0.5 m) above the water, boasting a peak power output of 150 kW. You can watch here a prototype of the boat hitting the water for the first time in Italy earlier this month.

As for the inaugural season of the E1 series, it is scheduled to kick off in early 2023.