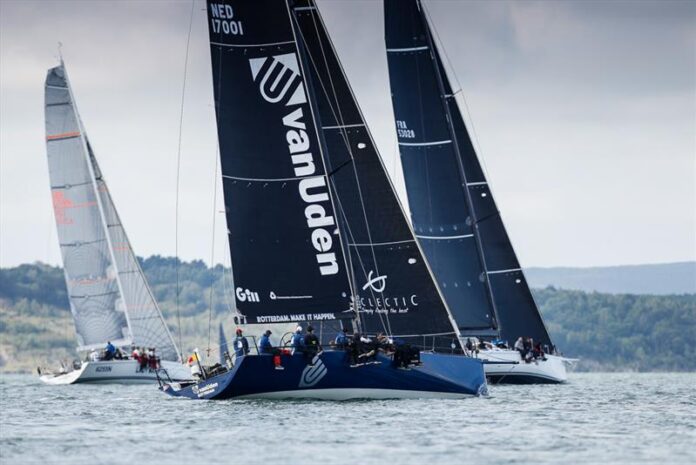 Having previously straddled Europe, visiting other major yachting hubs such as Cowes, Cork, Marseille and Sanremo, the seventh edition of the prestigious IRC European Championship this year will take place over 25-28 August in the Netherlands, alongside Damen Breskens Sailing Weekend.

This will be first time that the IRC European Championship has been held since 2019 after the pandemic forced the last two editions to be cancelled. In 2019 the championship for the simple, single number rule, operated internationally by the Royal Ocean Racing Club and the Union Nationale pour la Course au Large, was dominated by two Marseille-based boats: the winner Yves Ginoux’s Farr 36 Absolutely II and Jean-Pierre Joly’s GP42 Confluence Sopra DPMF, finishing ahead of the local boat Gianluigi Dubbini’s Italia Yachts 9.98 Fuoriserie Sarchiapone.

Close to the Belgium border, on the south side of the River Scheldt leading to Antwerp, Breskens is well situated as a yacht racing centre, offering direct access to courses both in the estuary or in the North Sea.

Following a day of registration, equipment inspection and measurement on Wednesday, 24 August, racing will take place over the following four days. Nine races are scheduled, including one ‘long coastal’ of up to six hours duration (and carrying a 2x scoring co-efficient) and up to three shorter courses each day on either windward-leeward or coastal courses. One discard will be applied once five or more races have been sailed and two if the full nine race schedule is completed.

The fleet will be divided in three: IRC One for yachts with a TCC of 1.050+, IRC Two for those with a TCC of 1.000-1.050 and IRC Three for 0.900 to 1.000. To ensure accuracy of the rating and absolute fairness of the competition, entries must have an Endorsed IRC certificate, but to obtain one is straightforward and not costly using local IRC measurers and without the need for any complicated hull measurement or inclination requirements. More information at ircrating.org/irc-certificate/irc-endorsement

Once again the event aims to promote diversity with one extra crew permitted, over and above the number stated on a yacht’s IRC certificate, if that yacht’s crew includes at least two females or two youth of up to 25 years of age.

The 2022 IRC European Championship is expected to attract a highly competitive fleet. Already entered is one the hottest yachts from the area: the Ker 46 Van Uden, skippered by three-time Volvo Ocean Race veteran Gerd-Jan Poortman and with a crew of young, up and coming Dutch sailing talent from the Rotterdam Offshore Sailing Team. Now into its sixth year, the campaign was set up to help prevent youngsters dropping out of sailing once they had finished in dinghies. It is funded by a business club and supported by the marine industry, with her crew carrying out the majority of the maintenance work themselves.

The team is planning on a competing in the Solent early in the season, including the RORC Easter Challenge and the IRC Nationals in Cowes over 10-12 June, before returning home for the IRC Europeans.

Poortman has competed at Breskens Sailing Week for the last 20 years and recommends it. “It is a fantastic sailing place. There are tidal waters – it’s right on the North Sea. I love sailing there. You can do nice offshores and windward-leewards. There is a lot of room. It is always well organised with great tents and the Breskens people are always very friendly. Breskens is a small town but I also like small towns because everyone stays close together and you have a lot more fun… It is far away from anywhere in Holland, so everyone stays there. There is a nice little town centre with lots of restaurants and bars.”

“I am greatly looking forward to visiting Breskens and seeing a grand gathering of the IRC fleets from across the Netherlands, Belgium and Germany along with a strong turn-out of entries from the UK and France,” said Neville. “It will be a good opportunity to showcase IRC with all the benefits of its simplicity and accuracy in a new venue for this championship.”