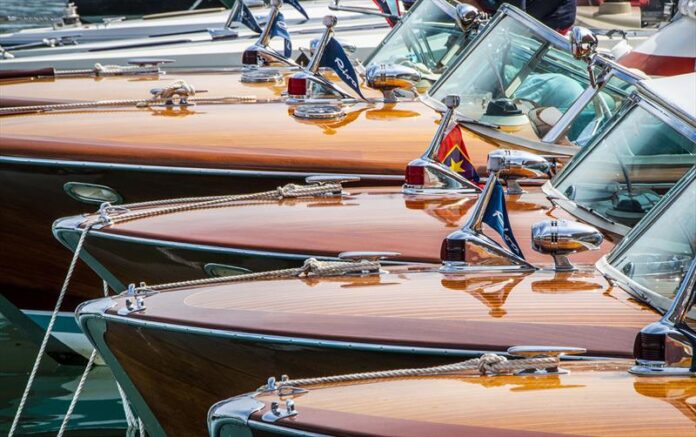 After the great success of the past editions, the IV Tributo Carlo Riva returns for an event in great style scheduled from 2nd to 5th June 2022 in Santa Margherita Ligure, pearl of the Riviera di Levante.

The Tribute, organized by the “Riva Society Tigullio” – the first historical Riva Club in Liguria, and the first one on the sea in Italy – in cooperation with Ascom Confcommercio and other important entities of the territory, is an unmissable occasion to celebrate these extraordinary anniversaries, and for this reason it has already been included as a reference point among the most important events of 2022. This fourth edition will be promoted by the Municipality of Santa Margherita Ligure and the Santa Margherita Ligure – Portofino Hotel Group, while the Municipalities of Portofino and Rapallo will guarantee the traditional organizational and logistic support.

From the 2nd to the 5th of June the owners of the splendid vintage Riva motorboats will be in Santa Margherita Ligure to spend unique days there, in the name of the most exclusive glamour and entertainment, honoring one of the brands which, thanks to its unmistakable savoir-faire and heritage, has made Made in Italy famous at international level, also giving the public of enthusiasts the chance to enjoy a unique show of exhibitions and parades.

The fourth Carlo Riva Tribute, as it happened in the previous editions, will take place in the wonderful sceneries offered by the Tigullio Gulf, cradle of tourism on the Eastern Riviera, and Santa Margherita Ligure will be the real beating heart of the event for the over 40 boats that will take part in it. Here the area of interest will be the Calata del Porto, with the Hospitality Village set up at the beginning of the Calata itself, while the whole town will be involved in the spirit of the event and will host meetings and initiatives dedicated to participants and the general public, including the travelling photographic exhibition for the entire duration of the meeting.

The event will take place over four days, during which the crews will be able to challenge each other in unique skill tests, sail side by side and experience unique moments of conviviality, immersed in the evocative setting of the Gulf of Tigullio. A pleasant novelty will further enrich the already plentiful program of activities of this edition: participants will have the opportunity to enjoy an evocative excursion to the historical villages of the Ciqnue Terre, which will precede the traditional contest of elegance on the final day.

The Riva shipyard has its roots in the distant past 1842, on Lake Iseo, when Pietro Riva, recently arrived in Sarnico, opens the construction site where the first Riva creations are launched and immediately stand out for their class and personality. Quickly, Riva gains awareness and respect; the yard also thrives thanks to the management by Ernesto Riva who, having succeeded his father Pietro, introduces internal combustion engines on its own boats.

After the Great War, Serafino Riva is responsible for the definitive imprinting and transforms the high-quality products of the yard in a real brand, handing it over to history: production turns from transport to motor boating, at the time still in its early days. At the turn of the 1920s and 1930s, Riva, with its motorboats racing, signs many records and victories in national and international competitions.

The 1950s, on the other hand, are those of Carlo Riva, animated ever since his childhood from a boundless passion for boats and for the family business. In 1956, starts the collaboration with the designer and architect Giorgio Barilani who holds the position of design manager from 1970 to 1996. In November 1962 the myth was born: its name is Aquarama. Since its launch, Aquarama becomes the excellence symbol of Riva, a love-brand within the brand.

It is the year 1969 when another milestone marks the history of the legendary brand: the fiberglass production. Then in September 1969, Carlo Riva, embittered by the harshness of union climate, sells the yard to the US Whittaker, while maintaining the roles of President and General Manager, from which he resigned in July 1971. In 1988, the English group Vickers, which also included the Rolls Royce brand, acquires one hundred percent of the shares of the Riva company.

On 1 May 2000 the Ferretti Group acquires the Riva shipyard, and brings it back to where it still is: at the top of world boating, recognized Made in Italy nautical art emblem. This careful and virtuous path is due to the know-how of the Group’s Engineering Department and to the designer Mauro Micheli, founder, together with Sergio Beretta, of Officina Italiana Design, the studio which exclusively designs the entire Riva fleet.

Finally, in 2012, the Chinese industrial group Shandong Heavy Industry Group – Weichai Group, among the most important at an international level in the field of engines, commercial vehicles and machinery for constructions, becomes the majority shareholder of Ferretti Group. The solidity and strategic vision of the industrial colossus allow yet another leap in quality, guaranteeing resources and projects a long term.