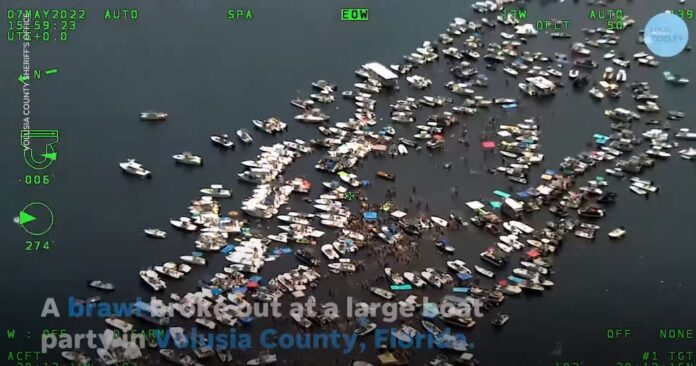 If you ever wondered what drunken, reckless behavior at the wheel of a motorized vehicle looks like on water, this year’s edition of Mayhem at Lake George is here to show you. Florida style, if you will.

Mayhem at Lake George is an annual event that is half boat party, half boat meet, and with this year’s edition, full-on mayhem. Taking place on Lake George in Florida, some 40 miles (65 km) west of Daytona last weekend, the event lived up to its name. A brawl broke out on the DJ platform, and because of the huge number of people present and the large quantities of alcohol consumed, spread out.

The USA Today video at the bottom of the page includes footage from the Volusia County Sheriff, which had a helicopter in the air, and offers a good indication of how the scene looked like when the fight started. The conclusion, at the end of a very troubled day, is that you shouldn’t drink and operate a boat. If it still needed to be said.

The County Sheriff’s Office says that 38 boating citations were issued on the occasion, as well as well over 100 warnings. Only five people were arrested: three for boating under the influence (DUI on water, if you will) and two for disorderly conduct.

All jokes aside, one person was severely injured in the brawl, and is now receiving medical care, after he was transported to land by boat and then flown out to a hospital.

Volusia County Sheriff Mike Chitwood blames the brawl on alcohol (duh), saying “People are just out there to have a good time, but like anything else, when you have a huge concentration of people like this and you have alcohol involved, you do have some incidents.” More charges are pending, the police say.

Let his be your reminder to not drink and drive, or go out boating.