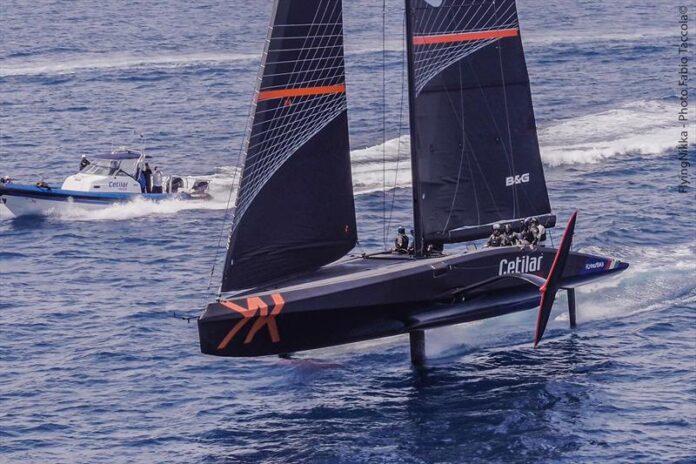 FlyingNikka’s first flight is a date to mark on the calendar, with indelible marker: a flight which at 1pm today, Thursday 12 May, off the coast of Valencia, Spain, marked the beginning of a new era for offshore sailing.

“I can hardly describe the emotion I’m feeling right now,” explains Roberto Lacorte, a visionary owner who, with the launch of the FlyingNikka project in December 2020, proved to be a pioneer in the field of full foiling offshore sailing. “Seeing FlyingNikka fly for the first time, after these intense months dedicated first to its design and then to its construction, is something magical, extraordinary, unique. I am truly thrilled.

At 60 feet long (just under 19 metres), FlyingNikka – the first “full foiling” sailing yacht in the Mini Maxi category, conceived for long voyages – was designed by a team of designers coordinated by Irishman Mark Mills.

Built in 8 months at the King Marine shipyard, in Valencia, under the supervision of Project Manager Miguel Costa, she touched the water last 5 May for a first technical launch – the official one is scheduled in the next few weeks in Italy, at Punta Ala, where the team’s base will be located – the first example of a new generation of racing boats, which aims to revolutionize the very concept of offshore sailing.

After further fine-tuning work followed by a series of towing flight tests, finally today was the day of the first sailing test, which was brilliantly passed: 6 hours at sea, with the full crew on board – Roberto Lacorte, Lorenzo Bressani, Enrico Zennaro, Alessio Razeto, Andrea Fornaro and Lorenzo De Felice – in which FlyingNikka impressed, sailing in full foiling, thanks to its long arms equipped with T-shaped foils, with ease and efficiency.

Powerful, stable, futuristic in every detail. And, above all, very fast: FlyingNikka is a racing beast with potential yet to be developed, which once fine-tuned during the sailing tests scheduled for the next few days, promises to leave its mark in the offshore races in which it will participate. A racing program that will be defined in detail after the next test session, as well as the exact date of the Italian launch.

“After a huge effort by king Marine and the Flying Nikka team the launch and initial testing has been a huge success so far, with the towed foiling tests validating all of our expectations regarding performance. Knowing now that the foils and flight controls operate as expected it clears the way for us to fly”, explains Mark Mills, in Valencia with the KND Marine specialists who developed FlyingNikka’s appendages with Nat Shaver & PURE.

“Now we have a very important part of the campaign ahead of us, which is fine-tuning the boat and crew dynamics while sailing,” concludes a beaming Lacorte. “Then we will enter race mode and it will be really interesting to see how far FlyingNikka can go. It is a boat that has no comparison, a futuristic racer, so we expect it to be able to write a completely new sailing story, flying on the water for long offshore sailings like no one else has ever managed to do.”

FlyingNikka can count on the partners North Sails for the sails, B&G for the onboard electronics and Montura as supplier of the official clothing – the carbon mast was instead made by Southern Spars – and will race under the colours of the Yacht Club Repubblica Marinara di Pisa.

Main sponsor of the campaign is Cetilar®, a brand of the PharmaNutra pharmaceutical company, already involved in the world of sport in various disciplines, with its Cetilar Racing division, successfully engaged in motorsport and in the growth of young athletes with the Cetilar Academy program.