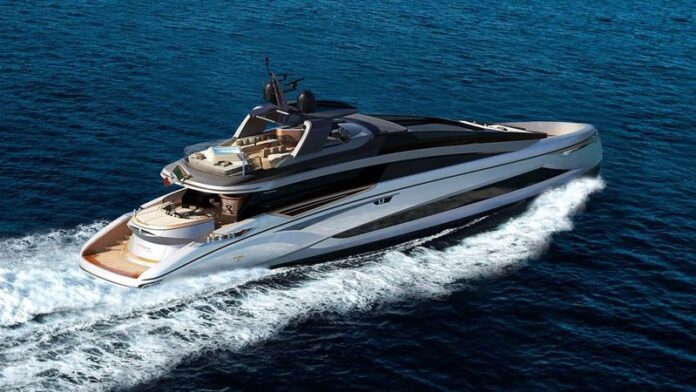 Tecnomar has delivered the fourth unit of its 36.6-metre Evo 120 series, which was launched last December from its shipyard in Marina di Carrara, Italy.Much like her sister ships, the fourth unit sports an exterior and interior styled by Gian Marco Companino Design, Art Director of The Italian Sea Group.

Her builder, Tecnomar, oversaw the schematics of her naval architecture.

Inspiration was drawn from the automotive sector for her long, flowing and sinewy exterior lines. With a beam of just 8-metres, the Evo 120 has a slender silhouette that furthers her sport-like prowess. She can perform too, as Tecnomar has equipped her with twin MTU engines that allow her to cruise at 19 knots, and reach speeds of 21 knots.

When traveling at the more amicable 10 knots, the Evo 120 has a range of 1,600 nautical miles. Up to seven guests can be accommodated onboard the Evo 120, alongside five crew. Her staterooms are all located on the lower deck and comprise a full-beam owner’s area, a VIP suite and an additional guest stateroom. A massage and sauna room is also located on this deck.

Other standout features include an alfresco lounge and dining area on the main deck, as well as an infinity pool, also situated aft.