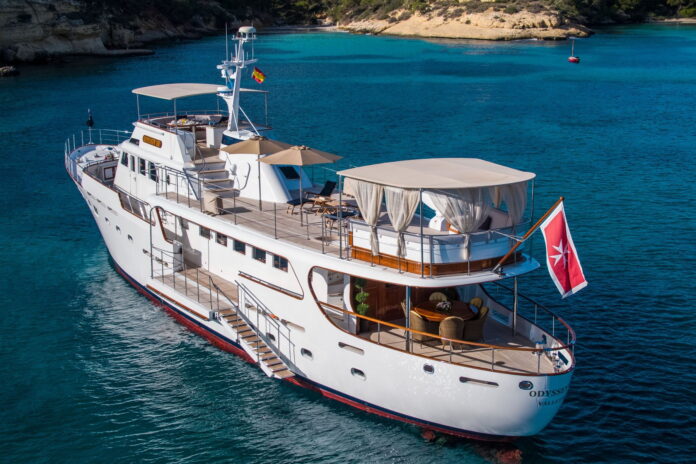 Yachts can become a “collector’s item,” too. There aren’t many classic yachts available that were completely restored, keeping their timeless character, so each one is a treasure that should be appreciated as such.

Acclaimed shipbuilding brands in the Netherlands, Germany, and Italy can be considered the equivalent of reputable car brands in the yachting world. Connoisseurs will appreciate the beauty and value of a Benetti classic, for example, such as Odyssey III. This vessel started its life in 1967 as Admiral Bolitho, part of the Italian shipyard’s well-known Mediterraneo 33 series. Its second life would begin in 2016 when a major restoration process was initiated.

That was due to the fact that the ship’s new owners were the Sykes family. Owners of the historic Sledmere house in Yorkshire, they understand the value of a historical masterpiece. UK’s Pendennis Shipyard was in charge of the transformation. It was a complex effort, going from reinforcing the vessel’s structural integrity and upgrading all of its systems to modernizing the living spaces.

The reborn 108-footer (33 meters) got new teak decks, new audio-visual systems, underwater lights, plus at-anchor stabilizers. Two double suites and two twins can sleep up to eight guests. It’s as welcoming as any modern charter yacht, featuring a generous main salon, al-fresco dining and barbecue, and a well-equipped galley. But it also maintains a classic interior style that speaks of its former glory.

With all the major systems onboard upgraded, Odyssey III can cruise comfortably at 13 knots (14.9 mph/24 kph). One of its new features is a side-boarding ladder for easier access to and from the water, a design feature that was actually used for early Feadship yachts, according to Elevated Magazines.

Since 2018, the majestic Odyssey III has operated as a successful luxury charter yacht. If anyone wants to keep this classic jewel for themselves, it’s available for sale through Camper & Nicholsons for £6.25 million ($7.6 million).

Facebook
Twitter
Pinterest
WhatsApp
Previous articleThe 21st edition of the Argentario Sailing Week successfully concluded
Next articleWhile others are hiding out, this oligarch’s $84M superyacht is chilling in Monaco