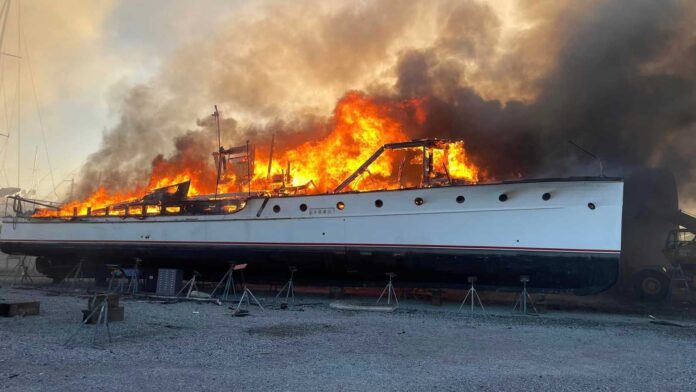 A 23.4 metre classic yacht Bougie has been destroyed in a shipyard fire in New Orleans, USA. She is one of five yachts that caught fire in a devastating blaze at SeaBrook Harbor over the weekend.

According to local reports, the fire department was called to the scene just before 6am local time on the morning of Sunday, November 13 to tackle the fire. The blaze is thought to have originated in an office building on the premises of the yard, which has also been destroyed.

Two boats on the water on three boats on the hardstand were “fully engulfed in flames”, according to local authorities. Two additional boats in the area also sustained minor damage.

Strong winds hampered efforts to control the flames, with a total of 55 firefighters working through the morning to get the fire under control. No injuries have been reported and the cause of the fire remains unknown.

Bougie is one of the larger yachts destroyed by the fire. She was delivered in 1929 as a custom commuter vessel, built in teak and mahogany with a three-cabin layout.

In 2013, the yacht was partially sunk with all of the lower spaces flooded, including the engine room. She has since been repaired, and under new ownership, she arrived at SeaBrook Harbor in late October to enter the next stage of a full-scale restoration.