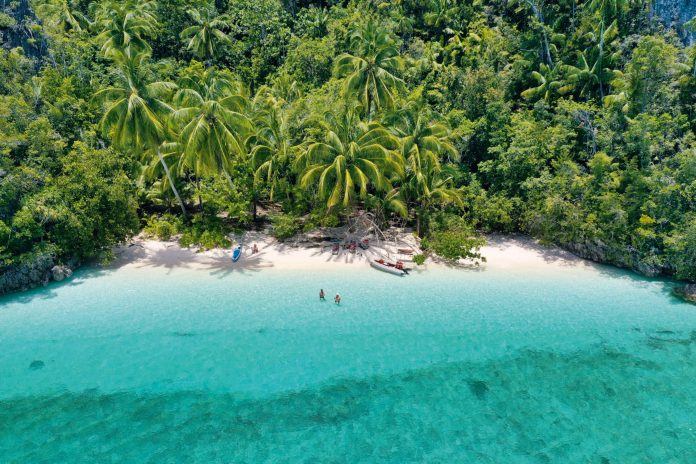 The Garuda flight to the eastern-Indonesian city of Sorong departs Jakarta after midnight and reaches the Bird’s Head Peninsula around 6am, ensuring its passengers arrive at the northwestern tip of New Guinea in a half-dreaming state.

It turns out that this is the ideal mindset for an expedition along the virgin coastline of the earth’s second largest island. The usual frames of reference are redundant here. West Papua is so unfamiliar, each day delivers encounters unlike anything else on any continent: a wedding-veil waterfall surges straight into the ocean from some unseen wellspring in the Kumafa mountains; on a hike through ancient rainforest – all trailing lianas and billowing staghorns – the air echoes with birds-of-paradise calls and the whoosh of hornbill wings; beneath the sea lie Neptune’s caves clad in corals of a thousand colours and populated by fish painted even gaudier hues.

If forced to pick my favourite day among the 10 that I passed on a pioneering odyssey aboard the Kudanil Explorer, an eight-suite expedition yacht that embarked on its maiden voyage late last year, it would be the one we spent anchored off Sabuda Island near the amusingly named Fakfak Peninsula. It was the first time anyone on board – including the Kudanil’s experienced crew – had visited this castaway island of weathered stone, tangled forest and two idyllic crescents of sugary sand. Crew members erected umbrellas and an impromptu beach bar on one, while guests snorkelled, kayaked, waterskied or submerged themselves in the translucent shallows with a chilled beer. A splinter group of hikers vanished into the jungle. Under the palms, our new Papuan friends were making lunch – we’d met the fishermen that morning as they were selling their catch to the ship’s kitchen; now they were grilling plump skipjack tuna for us on a palm-branch barbecue. They served the hot charred fish whole on leaves and it disappeared so quickly they insisted on grilling two more. “Let’s have a picnic!” one cried. Kudanil’s housekeeper Ani, from Sumba Island, decapitated coconuts to order with a machete. “I grew up with a knife in my hand,” she smiled.

Post-lunch, I paddled a transparent kayak to the second beach where a fisherman’s hammock beckoned beneath a perfumed sea‑poison tree. I spent a fragrant afternoon there, troubled by nothing more urgent than trying to decide whether the diaphanous blue markings of a passing birdwing butterfly were, in fact, the exact same shade of blue as the Ceram Sea in front of me.

Keepsake moments such as these defined our days aboard the Kudanil Explorer. To do justice to this remote and wild region requires the right vessel, the right crew and a prevailing mindset geared firmly to discovery. All three are accounted for on the Kudanil, a former tug and supply ship given a radical makeover by expatriate French shipowners Remi and Thibaud Epstein. Dozens of commercial tourism boats now ply this region, but most are converted or purpose-built phinisi, the classic two-masted timber schooners favoured in history by Indonesian explorers and pirates. By contrast, the Kudanil has been reimagined from the hull up as a hedonistic expedition ship-cum-boutique hotel, one that stands alone among competitors for its unlimited range – “We can cross an ocean if we want to,” says Thibaud – and unbridled comfort.

The Epsteins enlisted the noted hotelier and adventure consultant Jason Friedman (Aman, Four Seasons Tented Camp, The Siam) to advise on the Kudanil’s transformation. Friedman approached the task as he would any hotel pre-opening, writing training manuals, advising on layout and drilling the crew of 19 in friendly first-name service. His influence is evident in everything from the chilled towels to the calibre of cuisine and even the coffee, which comes with latte art by head steward Wahyu Kelana. The eight ensuite guest cabins are elegantly finished in teak, oak and shengal hardwoods, each opening to a private verandah furnished with armchairs, daybeds and end-of-the-earth scenery. There is a covered dining area and lounge bar on the main deck, where expeditioners are welcomed back aboard with ginger tea and the finest roasted cashews. But entertaining takes place, in the main, on the bridge deck above, a convivial arrangement of alfresco bar and dining flowing into palm-fringed pergola and sun loungers. Guests gather here for meals – menus range from sushi platters to a memorable Peking duck – and conversation.

Interiors boast impressive Indonesian art from Thibaud’s collection, including ancestor figures from Nias Island, a magic staff or malehat used by the shamans of northern Sumatra, and a very valuable 19th-century Pua Kumbu textile from the Iban people of West Kalimantan. “Usually they carried the captured heads in them,” explained Bruce Carpenter, a leading expert on Indonesian art and culture, and our expedition’s historian-in-residence.

Diving became a core activity of our days because half the group was certified, but the Kudanil is not primarily a dive boat; it is an offshore yacht with full dive capacity that encourages snorkelling, paddleboarding, surfing and fly fishing for prized Papuan black bass. Culture, history and art are a focus on scheduled voyages, with the likes of Carpenter and anthropologist Lawrence Blair on board to offer insights and guide village visits. Friedman too will make guest appearances. He first came to this region in 1994 as an instructor on one of the early live-aboard dive boats and has never left southeast Asia, so his knowledge and enthusiasm are major assets. But ours was, in part, a reconnaissance mission: outings were often characterised as “exploration sites”, meaning no one – not Epstein, not divemaster Garry Bevan, not even the captain, Wayan Widhyastya, with 20 years’ experience steering this ship – had any real idea what to expect, underwater or on land.

The star attractions of our itinerary were Raja Ampat, the picturesque archipelago of more than 1,500 islands renowned for its diversity of coral and fish, and the whale shark hotspot of Triton Bay. We cherry-picked our way along a 600-nautical-mile sweep from the Bird’s Head Peninsula to Tual in the Maluku Islands. The idea, says Epstein, is “to cover key attractions and then go beyond. That’s part of the luxury – to find places where we can be alone.”

And we were, for the most part, alone. At Batanta, one of Raja Ampat’s four major islands, we hailed a passing longboat to take us deep into the mangrove forest where we swam in a waterfall with only lorikeets for company. At Thousand Temples – a vast blue lagoon studded with jungled karst outcrops – we climbed to the summit of one of the highest peaks, Harfat, along a walkway fringed with orchids and Venus flytraps. The view from the top is similar to Vietnam’s Ha Long Bay or Phang Nga Bay in Thailand, but empty, silent, devoid of the crowds and carnival atmosphere.

Raja Ampat’s islands are mostly uninhabited, but its seas teem with more than 600 species of hard coral and 1,400 fish species. (According to distinguished marine biologist Dr Mark Erdmann there is greater biodiversity on these reefs than anywhere else on earth.) At Magic Mountain, a legendary dive site near Misool Island, we were greeted by a shimmering wall of blue and gold fusiliers that parted to reveal the bizarre form of a spotted unicorn fish, like a child’s drawing come to life. At Four Kings, giant manta rays performed water ballet for awestruck divers. Misool’s marine life is protected by a private reserve that was negotiated with traditional owners in 2005 and has since tripled to cover 300,000 acres of the planet’s richest reef habitat. The founders and guardians of this sanctuary are Marit and Andrew Miners, a Swedish-American and a Briton, who came here to dive in 2005 and found shark-finning camps stripping the seas for soup ingredients. So they stayed, mustering reclaimed hardwood and ingenuity to open their conservation-led, 20-bungalow Misool Resort in 2008 on the ruggedly beautiful Batbitim Island. A decade on, the clear seas brim with baby sharks and coy turtles. Since 2007 there has been a 250 per cent increase in biomass inside the reserve, Marit tells me, and shark numbers are 25 times higher inside Misool’s “no take” zone than outside it. In 2011, the Miners successfully petitioned the regency to declare the whole of Raja Ampat a shark and manta ray sanctuary. It has been several years since they last saw a shark-finning boat. But vigilance is constant: the Misool Foundation operates a full-time patrol team of 15 local rangers. “Raja Ampat is in the limelight,” she says. “The international press are interested in it and the government are aware of that, and that plays a role in the decisions they make. I think they are much more likely to take good care of it.”

A few hundred miles southeast of Misool lie the similarly abundant and protected waters of Triton Bay, hailed as the next frontier of diving in Indonesia after Raja Ampat and Komodo. Its dive sites were first surveyed in 2006, but the big attraction here is the chance to swim with the world’s largest fish. Whale sharks loiter by the trimaran fishing platforms, or bagans, that anchor in Namatota Strait and use their metre-and-a-half-wide mouths to vacuum fish from the submerged storage nets. For a small fee, fishermen will also happily hand-feed the giants for the entertainment of divers and snorkellers.

It is an arresting experience to leap off a tender and come face-to-fin with a seven-metre beast. Especially one as handsome as the whale shark, with its striking Morse-code livery of dots and dashes. The locals call these magnificent creatures ikan hiu bodoh – “stupid fish” – because they are so docile (the only real threat to humans is being winded by a wayward tail). The interaction lacks the authenticity of Misool, but the thrills are genuine. On a second visit to the bagans, divers and snorkellers alike were spellbound as dozens of dolphins joined two whale sharks in the feeding frenzy. Friedman, who has logged 3,500 dives in his career, declared it the best he has ever done.

It had been a voyage of epiphanies. By the time we pulled into port at Tual, the now brown-limbed people aboard the Kudanil Explorer had been transformed. Physically, obviously, but also mentally – perhaps a few even spiritually – after a journey of unforgettable firsts. No two Kudanil expeditions will be identical but there’s a chance to relive the above itinerary, more or less, in November, when Friedman next joins the ship. Sabuda Island is definitely on the agenda. He’s got the fishermen’s phone numbers to call ahead – and this time, they’ve promised to bring lobster.

Cruising the Islands of Tonga with the Oyster World Rally

Hundreds of yachts are crowding the waters around the US Virgin Islands as other Caribbean islands close their ports, and it’s creating a trash...