HomeEventsRegattaTunnel Vision, Cutting Out The Noise As The Finish Beckons
EventsRegatta 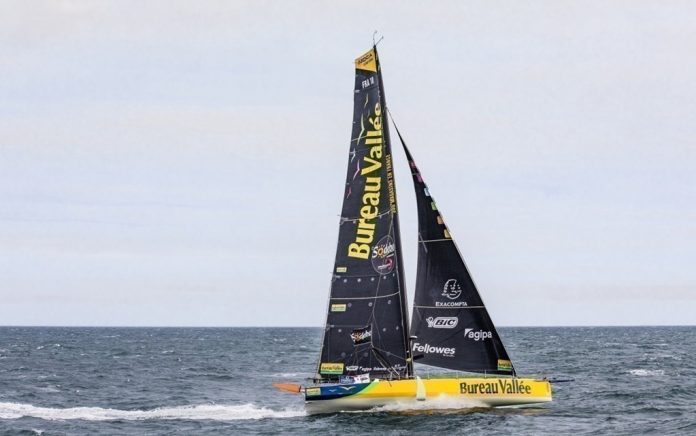 Behind the top group Yannick Bestaven and Damien Seguin were first to gybe and are heading north in search of the stronger breeze.

In second place Louis Burton is passing between the islands of San Miguel and Santa Maria which he should see to starboard after sunrise. The skipper of Bureau Vallée 2 should be in winds of around than 20 knots which has meant that Burton has been at 18.6 knots more than a knot and a half more than Dalin who must be itching to gybe, to get on to his starboard foil and open distance to his pursuers. After his blip yesterday morning the skipper from Saint Malo seems more consistent again and making 414 miles in 24 hours compared with Dalin’s 388.

Meantime in third place Boris Herrmann is tracking Dalin closely, perhaps looking like he has marked the most consistent leader of the race as his key rival and so best to try and mark him, to stay closest to his wake, not least in the knowledge that he has six hours of compensated time.

Yann Eliès noted last night “Once the Azores ridge has been crossed and delivered its verdict the skippers can’t help running numbers all the time making making time and distance calculations. We can see strategies in their course Boris feels he had better ‘suck the wheel’ and stay in Charlie’s wake as he has better speed. “

For sure in this situation in any sailboat race the convention is to stay with your strongest rival and here Herrmann cannot or does not hope to mark Burton – who he should be faster than, same as any thoughts of covering Bestaven – and Thomas Ruyant is on his hip and, until they gybe, slower.

Bestaven conceded distance in fifth the skipper of Maître CoQ IV is 212.5 miles off the lead, fifty more than 24 hours ago. His strategic choice of the northern route is different from the first four. If the routings play out he will pass through the north of the Azores, between Horta, Velas and Santa Cruz de Graciosa on his left, and Angra do Heroismo on his right. His objective is to stay on the edge of the depression climbing all the way north to the latitude of the south of Brittany before slanting back down to Les Sables. His proximity to the low, his compromised sails and his 10 hours and 15 minutes of time all are factored into his decision.

In terms of distance to the finish Italian skipper Giancarlo Pedote (Prysmian Group) is up to sixth  place in the standings at 257.6 miles. He is to the south but already at the longitude of the Azores he has the better of Damien Seguin (Groupe APICIL) who, last night gybed go due north on the routing similar to that of Yannick Bestaven.

In 24 hours, the gaps have widened considerably especially for those heading north who are sailing more parallel to the layline rather than towards the finish. Seguin is now 268.7 miles behind, against 159.1 yesterday at the same time, Jean le Cam, eighth this morning is now at 572.6 miles, and Benjamin Dutreux is at 666.4 miles. And so, increasingly, in these final days of the race, the expected hierarchy of speed potential is finally coming more and more into effect, the straight daggerboard boats slower and the more recent foiling boats faster and more efficient.

Three times winner of La Solitaire du Figaro and fourth on the last Vendée Globe Yann Eliès observed,
“ There are pitfalls to be avoided getting into the North Atlantic depressions, that is never easy to negotiate because they are always worse than the models predict. I don’t think they’re expecting a big, big gale, but they can still get caught out in the harsh weather and seas three weeks after leaving the big south. It’s different too because the nights are long, unlike in the south. They are in complete darkness for long periods. It’s a tough end to the race, because you think we are getting towards the finish line, but the conditions in the North Atlantic and Biscay can still cause damage. Charlie in particular, I feel like he is in his way. Everything that external to around the race  you need to shut out. For me I would tend to postpone everything when it comes from the outside world, the messaging groups, the requests for interviews, the videos. The external world wants to know, but I think skippers want to  staying in their bubble, as focused as possible on what to do and not to take lift their heads until the finish line. One of the big difficulties at this point in this race is not projecting ahead to what will happen after the line. The demands will be more and more pressing. But this race about now is a about victory. And to win first you have to finish. This means that the rhythm is intensifying: eating, sleeping, every minute working your boat counts. You enter a tunnel that is no longer just the Vendée Globe that we have known with the “clac clac clac”: you have to deal with the really pressing, important things in terms of performance and getting across the line and shut out the external noise.”