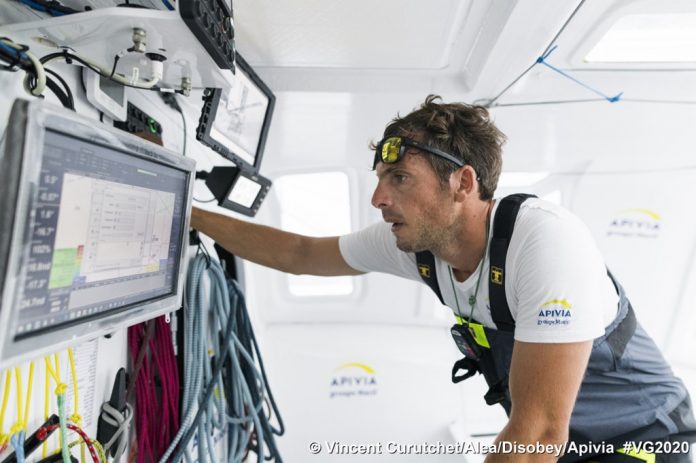 The margin of victory on this Vendée Globe may be down to minutes rather than hours. And while there seems to be a more remote chance that the actual winner will be decided on corrected time – after time compensation for being involved in the rescue of stricken skipper Kevin Escoffier – the projected time margins for the podium places are extremely tight.

The closest margin in recent editions was when François Gabart won the 2012-13 Vendée Globe by 3hrs and 17 minutes from Armel Le Cléac’h.

Current projections based on the accurately assumed speed predictions for the leading boats seem to confirm that this race will be decided by less than that.

That 2012-13 duel was settled at the Azores when Gabart had a lead of 100 miles before a sprint across the Bay of Biscay in 40-45kts of wind. Approaching the Azores tonight the decisive match is three cornered right now with Charlie Dalin (Apivia) holding 34 miles of an advance over Louis Burton (Bureau Vallée 2) while Germany’s Boris Herrmann (Seaexplorer-Yacht Club de Monaco) is 62 miles behind and has been catching distance over the course of the day.

Burton’s track this morning showed notable deviations, perhaps revealing he has had further technical issues with headsails or possibly his pilots which gave him problems in the big south. The race tracker shows Bureau Vallée slowed. Race Director Jacques Caraës offers a suggestion:

“Between 5:30 am and 8:30 am, we noticed that Louis Burton’s course was not as straight as that of Charlie Dalin. We called to check all was OK and no reply. So it might have been a change of sail, was he operating under spinnaker, is his anemometer still performing as well, it might possibly have been a wrap in the spinnaker which often happens when the pilot is not getting the best wind information.”

Louis Burton has since picked up speed (over 15 knots) and remains neck and neck with Dalin, while Herrmann remains an ever present threat. The strategic question is when the leaders gybe this evening or tonight at the Azores. Increasingly it looks like all three will pass south and gybe east of the island group.

As soon as Dalin gybes he will be on to his favoured side, able to lift off his starboard and finally get his Verdier design back up to maximum potential after more than one week on starboard gybe. He should then be able to extend on Burton.

“For sure Charlie is in Figaro mode now, making sure he is keeping everything regular and looking to be in the best shape for the final push. You don’t see too much change in his course and his approach, he is super regular and consistent in the way he sails.” Comments Caraës.

In eighth at 492 miles behind the leader, win, lose or draw, Jean Le Cam is undoubtedly the hero of this Vendée Globe and will be afforded the warmest acclaim on his return to Les Sables d’Olonne. As the older daggerboard boats progressively lost time and distance on the leading group so Le Cam’s chances of finishing on the podium – even with his 16 hours and 15 minutes – are slipping slowly.
And the 61 year old recognises that fact and but is unlikely to press any harder than he feels necessary.

“Jean’s strategy is always perfect for his boat and for him that is what it is all about, the way he sails and to remain clean and smart matters to him, making his gybes in the right place and not giving anything away. If he feels he is not having a place on the podium, he likely won’t over press himself or the boat to try and achieve anything. He is already pleased and content with his race.” Remarks Caraës, a past crew-mate and long time friend of Le Cam’s.

Alexia Barrier (TSE 4 My Planet) was less than 250 miles to Cape Horn this evening and should round Sunday late afternoon perhaps a couple of hours ahead of Ari Huusela (STARK) who will leave the Pacific and complete his first time in the big south.

Preliminary Notes On Following the Finishes
Due to the health situation in France the finish will be ‘behind closed doors’ there will be no public access to the race village and to the channel.
Only those involved in the event and the media will have access to it.
A strict health protocol will be applied to ensure the safety of the skippers and all those present.

An exceptional coverage of the finishes
The full scale and intensity of the emotion of the arrivals of the first competitors will be delivered by means of an exceptional broadcast system to cover the finishes on all media channels.

The direct live broadcast of the finishes can be followed on the Vendéeglobe.org website and on all digital platforms and social networks platforms of the race.

These will also be fed with live text updates, photos and videos.