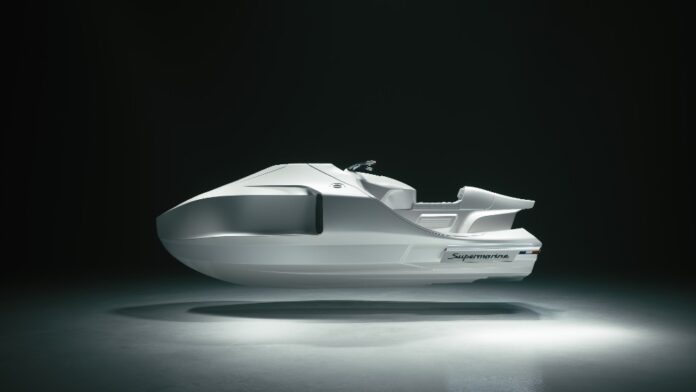 A multi-millionaire’s yacht is never complete without matching toys, and this is exactly what the Supermarine MM01 promises to be. The perfect, ultra-exclusive and high-performance toy for the rich seafarer.

Supermarine MM01 does not exist just yet, except in pre-production form, but it has been announced officially. Experts notes that testing for it begins this spring, with an estimated delivery date set for early 2024. The Supermarine MM01 claims to be the world’s first hyper-jet, which means it’s to a jet ski “what a hypercar is to a car,” and will be built in France, by Bouvet Freres Marine. Bouvet Marine, for short.

“Enter the legend,” reads a note on the official website of the company. The Supermarine is shown only in renders, and those too are not very revealing, despite their overblown size. But the two freres, Germain and Leopold Bouvet, tell the same media outlet that each unit will be built according to very specific and demanding criteria, which will turn it into a luxurious beast on water.

Only 30 such watercraft will be made, which makes sense considering production time for just one is of 500 man hours. With an aerodynamic, clean and timeless design, they will use a carbon-Kevlar layup onto which components will be “grafted,” a very powerful 300 hp (220 kW) electric motor, and only the finest and most luxurious finishes. There’s real leather lining the interior of the spacious trunk, and a champagne holder under the two-seater saddle. What’s an outing out on the water if you can’t have a champagne-sipping picnic, right?

Jokes aside, the Supermarine promises to be a thrill-deliverer. With a top speed of 65 knots (75 mph / 120 kph), it will be offered in two color choices: mother of pearl, or Nacre, and black, with no difference in terms of specs. Power will come from a lithium battery, with ultra-fast charging at the dock or directly on board a ship in just 50 minutes. Meanwhile, maximum autonomy is of 120 minutes.

Pricing is not specified, but Germain Bouvet says that this luxurious watercraft is not designed to compete with other personal watercraft on the market right now, but that it’s “part of a radically different segment.” Which most likely means that it will be terribly expensive, but said in a more roundabout and elegant way.

Manta5 Hydrofoiler XE-1 is the e-bike of the seas

If dreams were real, so would this travel companion called Audi X.

Yacht Extension, a revolutionary way to enjoy the sea