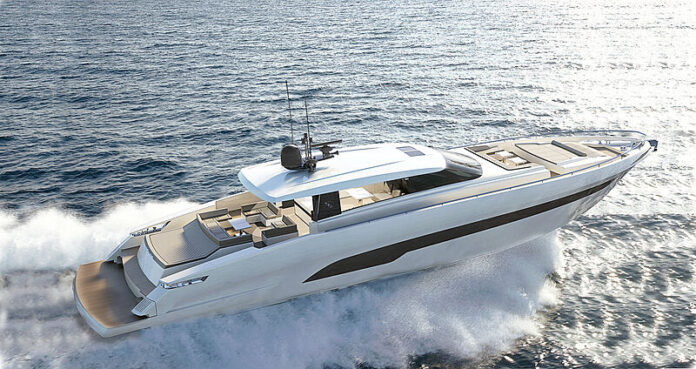 Italian yard Austin Parker Yachts has launched the first hull in its 27 meter Ibiza 85 series at its Pisa facilities.

It comes after the yacht’s sale was announced in March last year.

With design from Fulvio de Simoni Yacht Design, the yacht has been described as the “ideal boat for mature owners” with safe walkaround passages and the option to open the saloon to the cockpit.

The first unit offers a shaded alfresco dining area and a generous foredeck with plenty of space for seating and sun lounging.

The seven-metre beam, combined with the 27-metre length, allows for a total of five cabins down below, comprising three doubles and two twins. Three crew can be accommodated in separate crew quarters.

Power comes from a pair of 2000 HP MAN engines she exceeds 40 knots of cruising at full load.

Once delivered, she will form the flagship of Austin Parker Yachts. Smaller models by the yard include the Ibiza 52, the Ibiza 44 and the Mahon 54.