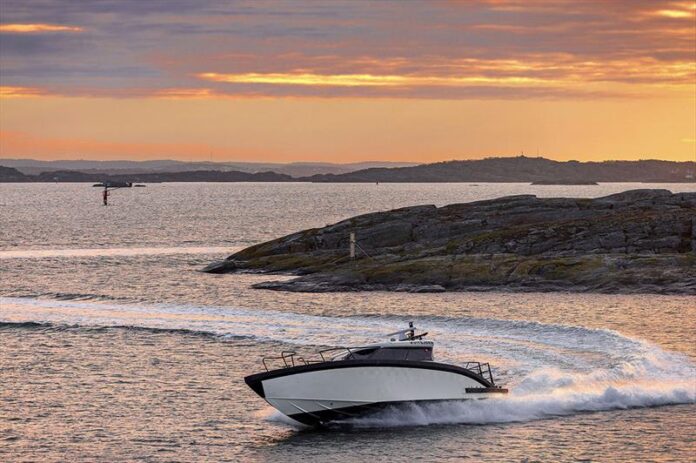 Volvo Penta’s advanced hybrid solution for Hurtigruten Svalbard’s new sightseeing vessel, the Kvitbjørn (Polar Bear), was recently put through its paces during its first test at sea. The tests were performed by Volvo Penta engineers and project team leads to make sure the solution was ready for official customer sea trials in the icy waters of Svalbard.

The vessel – which was first announced in November 2021 by Volvo Penta and Hurtigruten Svalbard – has the potential to transform the sustainable tourism industry by allowing guests to experience the wonders of Svalbard without disturbing the area’s nature and habitat, thanks to its near-silent operation. She will be formally unveiled in May at a special launch ceremony in Svalbard, before going into a three-year pilot test with Hurtigruten Svalbard. However, before the vessel is delivered the Volvo Penta team performed extensive tests and verifications at Volvo Penta’s marine test facility in Krossholmen, Gothenburg – in order to simulate the icy conditions the vessel is destined for.

“This project was one of many firsts,” says project lead, Mario Celegin. “The battery system is particularly interesting. Usually, these systems have to be cooled to between 20-30 degreesC to operate safely and efficiently. But this vessel will be working in extreme temperatures – the average summer water temperature in Svalbard is around -2 to 0 degreesC. To keep the battery temperatures at a steady

15 degreesC, we’ve had to develop an integrated heating and cooling system that doesn’t circulate seawater to avoid icing.”

All this new technology means that testing is more important than ever to make sure that the customer gets a seamless experience. For this project, Volvo Penta’s testing has been split into two distinct steps.

Firstly, there was an accelerated test program of a prototype vessel. This helped the experts to identify key factors, such as software bugs, that needed to be resolved. The learnings from this then went into developing the final vessel.

The second stage was to test the final vessel before delivering it to the customer, Hurtigruten Svalbard for sea trials. This testing period was a lot shorter – to limit wear and tear and guarantee a pristine product, but it was still important. The team of Volvo Penta engineers, software developers, and professional test drivers ran tests in endurance, performance and stability, electromagnetic compliance, battery cooling, heating performance, and diagnosis.

“This was an interesting test period for us,” recalls Mario Celegin. “A few of these are normal procedures, but because we were testing such novel technology the majority of our analyses were new too.”

Results that speak for themselves

So far, the vessel ticks all of the boxes that Volvo Penta and Hurtigruten Svalbard wanted to achieve. The brand-new hybrid vessel is virtually silent in fully electric mode, has an incredible range of 500 nm, and is easily maneuverable. The Volvo Penta team was especially pleased with the functional stability of the system and the seamless ease this gives the operator when switching between driving modes.

“I’m extremely proud of what we have accomplished with this new hybrid vessel,” says Mario Celegin. “This ‘learning by doing’ approach is a new way of working for us, but it’s been so inspiring. Working in a small productive team over the last two years has meant that we’ve been able to progress quickly and efficiently make decisions. Most of all it’s been a fun learning experience. I’m excited to see the results of our customer sea trials.”

Currently, the vessel is with boatbuilder Marell Boats for the final details of the build. The next stage of Volvo Penta’s project with Svalbard’s oldest tourist operator, Hurtigruten Svalbard, will see the vessel, a state-of-the-art hybrid Marell M15, begin official sea trials in May 2022, which are set to run for the next few years.