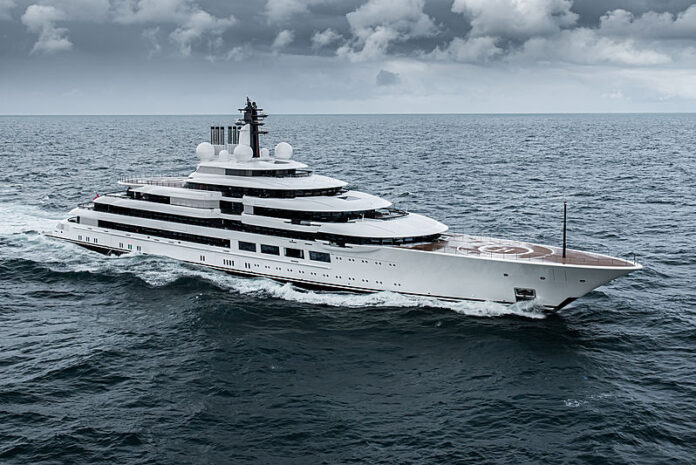 Italian media claim that the Italian Government in Rome release the name of Eduard Khudainatov as the owner of Scheherazade.

Khudainatov is the former President of Rosneft and is currently an energy investor. We ‘heard his name before’ related to other large yachts but could never confirm.

So we think that this story is true and that Khudainatov is the mysterious owner of the megayacht.

Despite all rumors and ‘evidence’ it really does not make any sense to us that she is Putin’s yacht.

First of all, why would he risk his ‘image’ by being photographed on a large yacht as Scheherazade?

If he is on board such a yacht, he will be spotted. (He was spotted last year on the yacht Chayka).

Also, the Italian Customs did board and research the yacht. Those customs will not walk on board and ask ‘Hi, is this Putin’s yacht? No? OK, ciao, have a nice day!”

They researched her ownership structure and decided to leave the yacht untouched. She was not seized.  They would have seized her if she was Putin’s boat.

Also, the Italian shipyard, where the yacht currently is for maintenance… They would be sanctioned if they kept working on her.

But they also researched the ownership structure and concluded that she is not owned by Putin.

Also, the superyacht would have fled Europe in advance of the war in Ukraine (like Graceful did / and we do think Graceful is Putin’s yacht )

International Media claim that ‘she may have a Russian owner’. In an interview with the New York Times, the yacht’s captain Guy Bennett-Pearce stated that he had disclosed the yacht’s UBO (Ultimate Beneficial Owner) to Italian Customs.

(In the light of the Russian sanctions… ) The yacht was never seized and also did not leave European waters. Most Russian-owned yachts did flee to Russia or Turkey in early 2022. This supports our conclusion that she has indeed a Middle East owner).

So we really think this recent information is correct.