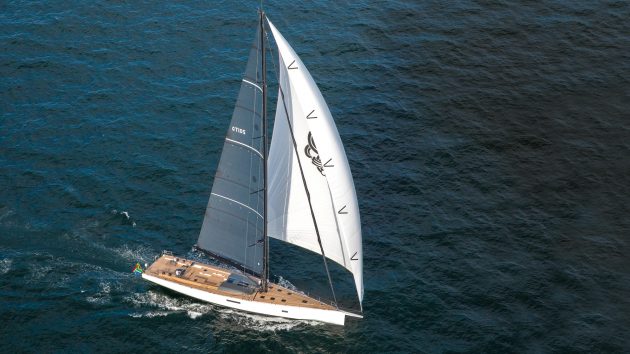 Further details have been revealed about SW 105 Taniwha, with a larger skylight in the saloon allowing for a huge quantity of natural light below decks.

Following her delivery voyage to Europe, Southern Wind’s fourth 105, SW 105 Taniwha has been revealed in all her glory. We covered details of her lightweight build before. Suffice to say that performance was a cornerstone of the design.

As Taniwha will spend 90% of her time cruising in the Mediterranean, the newly-revealed interior will come into its own. Nauta has continued the low-profile lines of the exterior below deck, and brought out the hull’s curves in the large saloon and three double cabins.

“We put a fantastic skylight in the saloon, which is a real element of the interior design because it allows for a huge quantity of natural light flooding in,” says Nauta’s Luca Pedol. “There’s a teak frame around the skylight, which raises the perception of space.”

In the cabins, the beds appear to float, as do the lockers fixed directly to the side of the hull. “They are more functional, more beautiful and they show the hull shape, instead of hiding it,” Pedol explains.

There’s widespread use of teak below deck, just as there is above. It has been desaturated and oil-treated to create an appealing finish. “It is lovely,” says Nauta’s Massimo Gino. “Warm but bright, easy on the eye and soft to the touch. The combination of the light flooring and the fabric-covered wall panels gives brightness to the interior.”