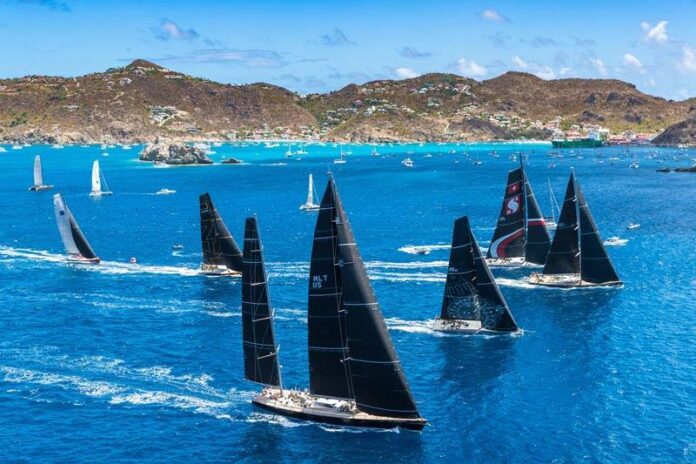 Regatta co-founder François Tolède is thrilled that racing has finally returned. “The line-up for this 11th edition is remarkable; in particular several competitive Maxis and TP52s will be very exciting to watch,” says Tolède. “And this week’s weather with a well-established tradewind, promises great competition on the water for all the classes competing.”

The 15 -25 knot easterly winds and big swell have already been testing the mettle of all the teams who arrived early for training, from the maxis to the newest class in the regatta, the 24-foot Diam 24od trimarans.

Hap Fauth’s Bella Mente returns with hopes of breaking their Les Voiles curse. “We haven’t had the best luck and are hoping this is the year that changes,” said Terry Hutchinson, tactician for Bella Ment. In the four times attending the regatta, they’ve broken two masts, and incurred an over-early penalty.

This year, Hutchinson says the team has had a very unassuming start due to Bella Mente’s late arrival to Saint Barth. This is the first Caribbean event for the team this year. “We did make it out for three hours training today, and straight away it makes you remember how hard and how much choreography it takes to sail the boat properly.

“We’re going to get better every day; that’s the best part about it,” he says. “We definitely believe it’s not how you start the regatta; it’s how you finish it.”

He’s looking forward to seeing how they line up against a tough crowd of competition, which for the first time includes an all-American line-up: Jim Swartz’s Vesper, George David’s Rambler 88 and Wendy Schmidt’s new Botin 85 Deep Blue.

St. Martin-local Pierre Altier has been spearheading the class growth in the Caribbean and has plans to create a Diam World Tour next year. In its first year competing in St. Barth, the fleet will have five boats on the starting line.

He and longtime crew Nicolas Ramis and Henri Jouan have been racing together for many years on different boats. “Our goal this week is to win, but first we need to make it through the week and avoid any breakdowns,” says Altier, who will undoubtedly be a crew to beat after already having recently won the Caribbean Multihull Challenge and then finished second in the St. Maarten Heineken Regatta.

Xavier Ledée, President of the Collectivity of Saint-Barthélemy: “It’s nice to see all these sailors back in Saint-Barthélemy! The past two years have been long for everyone, and events like Les Voiles de St. Barth Richard Mille are such an important part of our island. We are very happy to receive so many great international racers but also many sailors from the Caribbean circuit.”

Tolède is also grateful for the support of the island and the regatta’s partners. “We have wonderful partners like Richard Mille, and also to welcome new ones, such as the Air Caraïbes airline, Baron de Rothschild Champagnes, Clos Beylesse Rosé and Sisley cosmetics. Thanks to them, we can preserve the spirit of Les Voiles. Let the racing begin!”