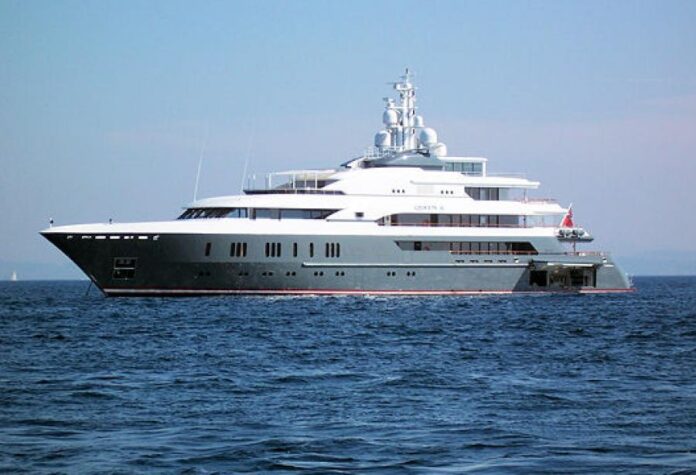 After successfully transiting the Suez and entering the Mediterranean the sanctioned Russian oligarch-owned superyacht Clio, transmitted the AIS message “armed security onboard”. According to vesselfinder the yacht is now at anchor in Turkey.

By K. Oanh Ha (Bloomberg) Clio, a $65-million superyacht tied to Oleg Deripaska, the Russian aluminum billionaire whose connections to Vladimir Putin have put him on sanctions lists, is on the move again after being anchored off the Maldives.

The 239-foot yacht had been in the Indian Ocean for at least two months as scrutiny around Deripaska and other oligarchs close to Russia’s president increased following the Feb. 24 invasion of Ukraine. Clio is heading for Gocek, Turkey, and was expected to reach its destination Friday afternoon local time, according to vessel data analyzed by Bloomberg News.

Deripaska, who has been under U.S. sanctions since 2018, sits atop an industrial conglomerate that includes a major provider of military equipment to Russia. The European Union sanctioned him earlier this month on the same day the bloc targeted Putin’s adult daughters. The U.S. and EU have levied sanctions on tycoons and those accused of enabling Moscow’s war in Ukraine.

Authorities in the U.S. and allies in the U.K., Italy, France and Germany are trying to locate the luxury boats and other properties of Russian tycoons.

Clio, which sleeps 18 and has its own elevator, previously appeared to be on the move around March 20, heading northwest from the Maldives. On March 21, its automatic identification system, or AIS, displayed a message that would have been inputted by the crew indicating there was “armed security” on board, according to data compiled by Bloomberg. That message isn’t unusual to ward off pirates in the region.

A few days later, the AIS showed Clio was headed to Dubai, before making a U-turn south, displaying it was en route to Mumbai. It then made its way back to Male, the capital of the Maldives, where it had been anchored, ahead of the 3,000-mile (4,828-kilometer) journey northwest through the Red Sea and Suez Canal toward Port Said.

The actions by the U.S. and its allies have scattered Russian yachts to locales perceived as less likely to seize the pleasure boats, including parts of the Middle East and the Caribbean, according to space-based analytics and data firm Spire Global Inc. Megayachts owned by Russians account for as much as 10% of the global fleet.

Fijian authorities were surprised this week by the arrival of the $325-million Amadea yacht owned by sanctioned gold tycoon Suleiman Kerimov, local media reported. Fiji port requirements state that any yacht arriving in the country must obtain approval from government ministries.

The Turkish coast seems to be a favored destination for Russian yachts, including Roman Abramovich’s Solaris. Many vessels owned by sanctioned moguls have gone dark and stopped broadcasting their locations, in contravention to international maritime law.

Facebook
Twitter
Pinterest
WhatsApp
Previous article
Second Yacht in the Mangusta 104 REV Series Hits the Water
Next article
Ragnar Superyacht is on the move again, after it was denied fuel in port