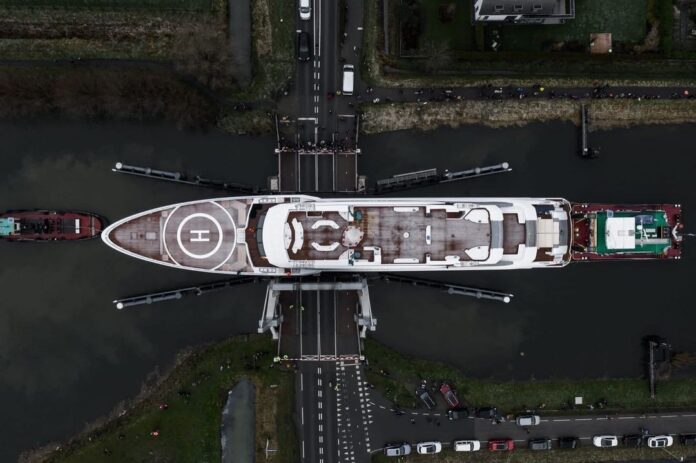 Before Jeff Bezos allegedly asked for a historic bridge in the Netherlands to be dismantled so that his massive new superyacht could pass under it, another giant luxury yacht almost got stuck through the tight canals of the North Sea. It made it in the end, but now it could get stuck under sanctions. Galactica’s owner was just added to the UK sanctions list.

These unprecedented seizing operations targeting the Russian oligarch’s luxury yachts have become a regular thing over the past months. But what’s surprising about this recent addition to the sanctioned oligarchs list is that the one who’s targeted is not just the owner of a superyacht but one of the owners of the yacht building company itself.

And it’s no small company. Heesen is one of the most reputable boat builders in the world, known for delivering countless award-winning, stunning superyachts. Its customers are typically among the world’s richest people, including many Russian oligarchs.

Vagit Alekporov is not only the president of Russia’s oil giant Lukoil, but also the owner of Heesen Yachts. However, the builder stated that its business won’t be affected, because Alekporov was added to the UK sanctions list not on the European Union’s one, while Heesen is a Dutch-registered company.

Dutch News reports that Heesen officially confirmed that its owner is now black-listed but that it will continue with business as usual, as it “only reports directly to its sole shareholder, Morcell Ltd.”

Business as usual includes the finishing work that’s being done on Galactica, Alekporov’s $108 million superyacht. The giant 265-footer (80 meters) is Heesen’s flagship vessel. Unveiled in 2020, Galactica (initially known as Project Cosmos) nearly got stuck several times when it was first at sea due to the local bridges’ very tight clearance and is now docked in Harlingen, the Netherlands.

Destined to become the fastest aluminum yacht in its size category, Galactica also boasts a massive helipad that transforms into an open-air cinema, a custom limousine tender in the garage, and enough room for 12 guests.

It’s unclear whether this megayacht also risks being seized since its owner is sanctioned by the UK or if it’s safe, at least for the moment, since it’s still undergoing work in the Netherlands. In an official statement, Heesen underlined the fact that its management publicly expressed being opposed to the war in Ukraine.