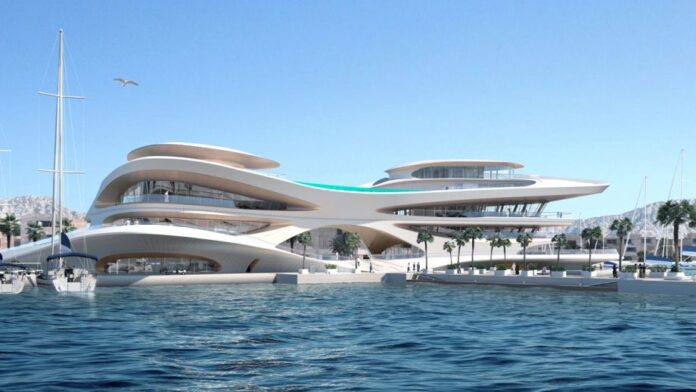 The Red Sea Development Company (TRSDC) from Saudi Arabia has shown the world its vision for the upcoming Triple Bay Yacht Club and it’s a sight to behold. The ultra-luxury yacht club will be built on the Red Sea as part of the Vision 2030 project and will anchor on the Triple Bay resort.

Set within the Triple Bay Marina of the Prince Mohammed bin Salman Nature Reserve, the 7,900-sq-m facility is designed by leading architecture company HKS as part of the “Amaala” ultra-luxury tourism development plans. This is a mega project thought up to stir the kingdom’s economy away from oil.

“Amaala is one of the flagship Saudi Vision 2030 projects and remains central to the kingdom’s ambition to become a global tourism leader. We anticipate that Amaala will become an international hub for luxury yachting, and as such, the yacht club required a world-class design, influenced by the surrounding natural elements and Arabic heritage, and underpinned by our commitment to sustainability,” said John Pagano, CEO of TRSDC, Amaala and the Red Sea Project.

The bold designs of the Triple Bay Yacht Club show that it will be a four-story structure featuring a rooftop cabana lounge, cantilevered terraces, an amphitheater for public performances, an infinity pool, as well as a private skylounge.

No less than 120 berths will be built to accommodate craft up to 130m in length, which is twice as long as the reputable Monaco Yacht Club can hold. Members of this ultra-luxury yacht club and guests will be able to get from their boats directly to the private skylounge via a lift that can be accessed from the water’s edge.

Phase one of Triple Bay Project, which is set to open in 2024, includes eight resorts offering approximately 1,200 hotel rooms.

Up until now, over 250 contracts worth more than $1.33 billion have been awarded for the construction of this wonder.

YCCS postpones opening and is ready for 2020 season